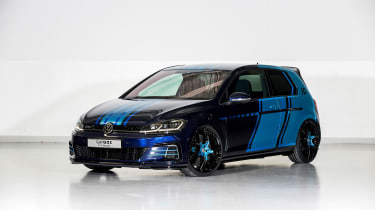 Volkswagen’s annual Worthersee gathering in Austria is a hotbed for all kinds of cars from the company's long and illustrious history. Much of the gathering is made up of modified cars, lovingly crafted by owners - but when Volkswagen itself gets in on the modification game, it usually leads to some pretty interesting results. For this year, VW has so far revealed details of two cars that will be shown off at the event; an estate version of the Golf GTE hybrid, and a 400+bhp Golf GTI earmarked First Decade.

Designed and built over a nine-month period by 13 VW apprentices, the GTI First Decade has a modified version of the standard GTI’s 2.0-litre turbocharged engine rated at 404bhp powering the front wheels only. In addition to the significant power upgrade the GTI also has a 12kW 48V electric motor, powering the rear wheels and providing the ability to manoeuvre at low speeds on electric power alone.

Much like the GTE and other hybrid models, the two power units are able to work in harmony to make this the first all-wheel drive GTI, or separately depending on the driving situation. Aesthetically, the Golf is painted in Atlantic Blue Metallic, with contrasting pale blue stripes and black detailing on the grill, wing and rear valance. 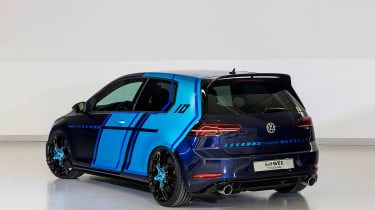 Riding on 20-inch wheels, the First Decade definitely has a bit of extra visual punch over the standard car, even disregarding the dubious paint job, and perhaps could hint at a forthcoming Clubsport model. In the cabin, the concept does without rear seats, replacing them with an array of interestingly coloured speakers, meanwhile the same hue highlights other parts of the interior too.

The second concept revealed so far is an estate version of the plug-in hybrid GTE model, wearing an equally interesting livery and the impulsE moniker. Mechanically, the GTE estate shares most of its mechanicals with the production hatchback, but offers a much bigger 16.8kW battery, doubling the standard GTE’s electric range. The Estate also brings along with it a variety of aesthetic upgrades, 19-inch alloys and some Audi RS-style wavy brake disks in place of the standard set up.

Both cars are unlikely to reach production, although the GTI’s 404bhp power figure is curiously close to the rumoured 400bhp Golf that was culled a couple of years ago. Even so, they provide a glimpse of big things to come at the Volkswagen Worthersee festival - we'll bring you more details plus live pictures from the event as we get them.