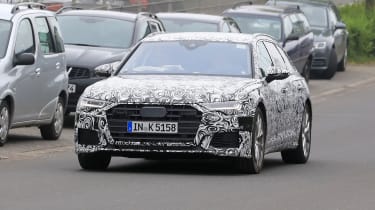 A year after seeing Audi’s new S6 saloon, albeit under a patterned wrap, the estate version has now made an appearance – but it too is similarly disguised. The new camouflaged car gives us a hint as to what the warmed-up A6 Avant might look like when it hits the roads next year to take on the Mercedes-AMG E43.

The biggest giveaway that this is no ordinary, common-or-garden A6 is the quad exhaust pipes exiting from the back. All of Audi’s S cars, including the S3, S5 and even the SQ5 and SQ7, have four exhaust outlets. The even more potent RS Audis usually have two pipes either side of the bumper.

>Click here to read our review of the Audi S4 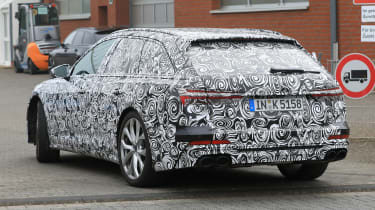 Even with a quartet of exhausts, there’s no guarantee the new S6 will continue to be powered by a turbocharged V8. Audi may have access to a twin-turbo 4-litre V8 from the Volkswagen Group stores (the engine that’s found in the Porsche Panamera Turbo, Cayenne Turbo as well as the Lamborghini Urus, amongst others) it’s likely the S6 will be powered by the same 3-litre V6 in the S4 and S5.

If the S6 does lose its eight-cylinder engine in favour of the V6, power will doubtless rise from the S4’s 349bhp to somewhere closer to the current S6’s 444bhp. Drive is then likely to be sent through an 8-speed auto gearbox and then, as is typical for a fast Audis, to all four wheels.

Unlike smaller performance Audis – such as the S3 that uses a Haldex four-wheel drive system – the S6’s longitudinally mounted engine means it can utilise a more traditional quattro layout with a centre differential that varies the amount of torque sent to either axle. Audi’s clever torque-vectoring Sport diff will also likely be part of the S6’s dynamic repertoire.

The benefit of the downsized engine, swapping the V8 for a V6, that the S6’s weight is likely to drop. Using the same aluminium-intensive MLB evo platform that underpins most of the Audi range will, too, keep the kerb weight down. 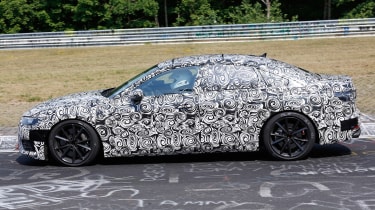 Drawing plenty of design inspiration from the Prologue concept of a few years ago, the new A6 will inherit a more muscular design, with prominent shoulders over the front and rear wheels. If anything, the Avant body style actually accentuates the rear arches – from what we can tell from the camouflaged cars anyway. The S6 will build on the standard car's design with trademark quad exhausts, silver mirror caps and more aggressive bumpers.

Inside, Audi’s latest generation MMI infotainment system will undoubtedly feature, with Audi’s first application of a touch-screen interface. Designed in conjunction with the new MMI system, the dash will take on a completely different aesthetic to the current car. We expect the quality and materials to be top notch in typical Audi fashion too.

Due to be revealed later this year, the new S6 may lack the romance of its predecessors and their large capacity V8 engines, but will still be an attractive ownership proposition.