Audi Prologue Avant concept hints at design language of next A6

The future of the fast estate 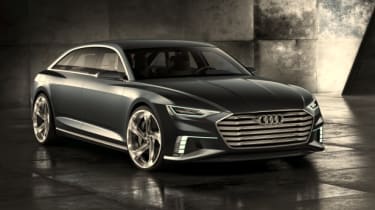 Audi has lifted the lid on its Prologue Avant concept. The images show a rough outline of the approach Audi will likely be taking with the next generation A6.

As is the way with Audi right now, lighting takes centre stage in the concept's design. The front boasts a set of laser headlights, while the air intakes for the car incorporate daytime running lights.

Almost taking the looks of the A7 and drawing them out longer, the low roofline slopes down aggressively towards a single red lighting strip.

The interior of the concept draws on the Virtual Cockpit found in the Audi TT, but extends things further, with multimedia handled by a long single display that runs along the entire central dash. Below this is another screen for controlling the car's driving setup, while the left of the wheel boasts a display for assistance tech. 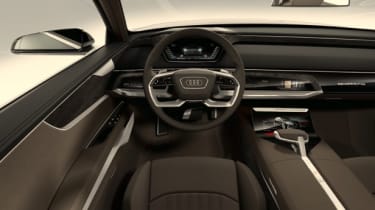 Like Volvo's decision to minimise clutter with the XC90, it seems like the move towards multiple displays for the concept hints at a simplified streamlined approach. The already on sale TT has done something very similar with its emphasis on driver involvement and using one display for multiple functions.

Really though, what excites us is what the Avant could become. Audi doesn't exactly messa about when it comes to super fast estates and the RS6 currently on sale is already a seriously exciting car.

Audi will have the Avant concept at the Geneva Motor Show, we will be bringing you more on it there.