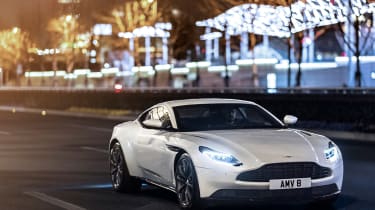 Aston Martin is expanding the DB11 range, supplementing the current model with a new V8-engined version. The new engine is part of Aston Martin's technical tie-up with the Daimler Group, and will widen the DB11's appeal. Could the V8-engined model become the pick of the range?

The engine in question is the same 4-litre ‘hot-vee’ turbocharged V8, used in a variety of Mercedes-AMG products. With 503bhp, the V8 gives away nearly 100bhp to the larger, more powerful V12, but counters with only a slight drop in torque at 498lb ft (from 516lb ft in the V12) and a substantial weight saving of around 115kg. 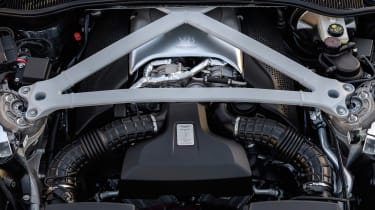 Thanks to the weight loss being concentrated around the front of the car, the lighter V8 engine should improve the already impressive dynamics exhibited by the V12 DB11. To build on this, Aston Martin has recalibrated the suspension setup, giving the V8 model a tighter, more dynamic feel.

Performance is still spritely as a result, with the V8 reaching 62mph in 4 seconds (0.3 off the V12) and hitting a top speed of 187mph. Aside from the effiency benefits (the V8 can return 28.5mpg officially), the smaller 4-litre displacement will also appeal to those markets which have displacement-based vehicle taxation, like China and Singapore. 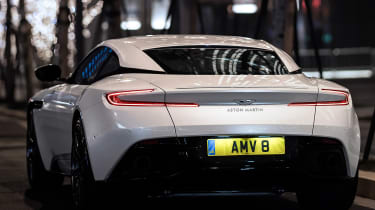 The engine has also been re-calibrated to fit alongside the character of the DB11, with the intake, exhaust and a new slimline wet-sump lubrication system developed by Aston Martin. The engine will be connected to the same 8-speed ZF automatic gearbox mounted on the rear axle, as in the V12 model. This is the first time the M178 engine has been connected to a traditional torque converter in either AMG or Aston Martin’s ranges.

Aston Martin has kept the visual differences subtle, and the V8 model comes as standard with the dark head and tail-lights that have recently become an option on the V12, along with a unique graphite finish on the 20-inch wheels. The bonnet, the largest single stamping of aluminium in the business, is also new, losing the two central vents for a slightly more streamline appearance. 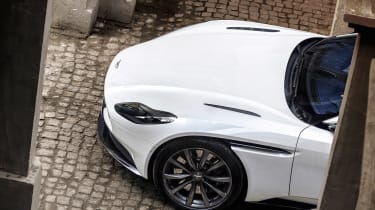 The same V8 powertrain is also set to be utilised in the V8 Vantage, but in order to maintain some distance between the two models the Vantage must remain smaller and more focused. With Aston Martin’s commitment to the manual gearbox, it is also not out of the question to expect another unique pairing of the Mercedes-AMG V8 with a manual gearbox in the near future.