AMG GT C Roadster could be the best GT variant yet 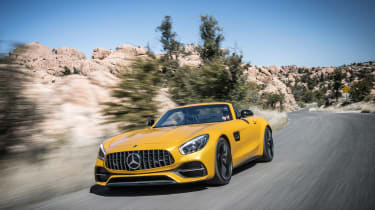 The GT C is the fourth variant in the Mercedes-AMG GT line up. The entry-level model is the GT, followed by the GT S, while this new GT C slots in just beneath the range-topping, track-focused GT R. It borrows certain hardware from the very hardcore top-spec model, and all of the important numbers – power and torque output, performance and price – slot it neatly between the GT S and GT R.

The Coupe version will follow in due course, but Mercedes has chosen to launch the car initially in Roadster form. A drop-top version of the base GT is also available. Curiously, Mercedes will not rule out a convertible version of the GT R just yet, despite the apparent contradiction of adding weight and removing structural rigidity from a very focussed performance car.

Mercedes’ 4-litre V8 with ‘hot vee’ twin turbocharging is one of the most impressive forced-induction engines on sale right now. With its pair of turbos nestled within the two banks of cylinders, throttle response and linearity are almost on a par with that of a high-performance normally aspirated motor. 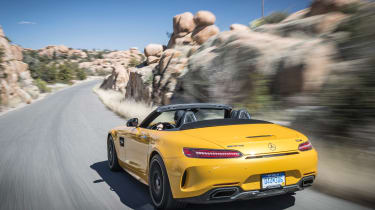 In the GT C power is rated at 549bhp and torque at 502lb ft, available between 1900 and 5750rpm. The seven-speed twin-clutch gearbox is slung between the rear wheels in a transaxle layout – the weight of the transmission pressing directly onto the driven wheels is where the GT’s incredible traction comes from. The GT C uses an electronically controlled limited slip differential, which is faster to react than the conventional mechanical item found in the GT.

Park a GT C alongside a GT and the only real visual points of difference are the more powerful car’s broader hips and its 20-inch rear wheels, rather than 19s. Its flared rear wheel arches are 57mm wider than the GT’s – at just over two metres wide the GT C is no slip of a car – while its rear track width is 44mm wider than the base model’s. The GT C borrows its rear axle from the GT R, which means it incorporates a rear-wheel steering function. Incidentally, some markets will be able to specify rear-wheel steering on the GT, but we won’t in the UK.

It’s reductive to say rear-wheel steering merely improves low speed agility and high speed stability, however. There’s more to it than that. In fact, the system has enabled AMG’s engineers to make the steering more direct without the risk of the car becoming twitchy or nervous. That rear-wheel steering function opens up a whole world of chassis tuning possibilities. 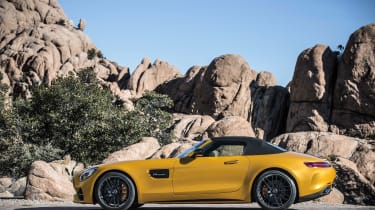 The weight penalty from Coupe to Roadster, once the folding soft-top roof mechanism and additional body strengthening have been accounted for, is a relatively modest 60kg. The total weight of the aluminium-bodied GT C Roadster is 1735kg. The roof is a three-layer fabric item, which retracts in just 11 seconds at speeds up to 30mph and is available in black, red or beige.

Mercedes has backed off the spring rates across the range in an effort to improve comfort. This GT C comes with AMG Ride Control – or adaptive dampers – as standard, but they’re an extra on the GT.

> Read all our other Mercedes reviews here

Like the GT R, the GT C gets a Race drive mode in addition to the basic Comfort, Sport, Sport Plus and Individual modes.

AMG may have tuned more comfort into the GT range, but this version still has a tension to it at low speeds over bumps and potholes. It isn’t uncomfortable and the ride does improve with speed, but it’s the first sign AMG has pitched this as a pure sports car rather than a GT, despite the badging.

The fabric roof does a good job of sheltering the cabin from the elements and although there is some sense of the windscreen surround shuddering slightly over rough road surfaces, the car’s structure still feels very rigid. The cabin, meanwhile, is a great place to sit with a low set seating position and an evocative view out over the long bonnet. The quality of the fit and finish within the cockpit is very good indeed. 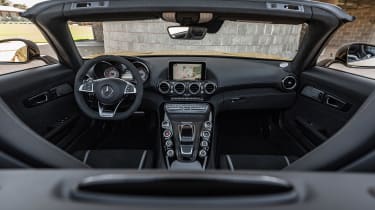 The major weakness of early AMG GTs was the light, hyperactive steering, which felt unnatural and gave you very little confidence in the front end of the car. Mercedes has changed the steering ratio and, it seems, the level of assistance, because this GT C has very predictable and intuitive steering that makes the car feel settled and composed rather than flighty.

That isn’t simply a result of the rear-wheel steering, incidentally, because the GT model that we tested at the same time, not fitted with rear-wheel steering, also had a much better helm than those early GTs. The GT C’s rear-wheel steering function is subtle, but there is a sense at lower speeds of the car being shorter than it really is; of the front wheels being closer than they actually are.

That really helps you to thread the car along a twisting stretch of second and third-gear back road, the direct, very readable steering helping you to place the front end exactly where you want it.

These cars have always had massive traction and almost freakishly good body control, and in this version those qualities are more evident than ever. There’s also decent pliancy over lumps and bumps, all of which means the GT C can be hustled down a road almost as quickly as your nerves permit. 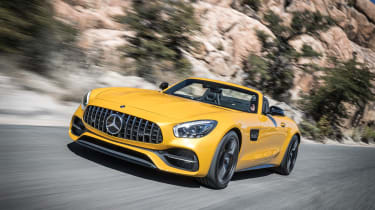 With its wider rear track the GT C also feels more stable and better supported at the rear axle, which means you can lean on it ever harder. When the back end does brake away under power it does so fluidly and controllably.

The overriding dynamic impression you get from the GT C is of the centre of gravity being somewhere just above the road surface, and of the mass being tightly packaged within the two axles: the engine nestles beneath the dashboard as much as it does the bonnet.

The engine is a powerhouse, delivering massive power and torque, and therefore huge performance, throughout the rev range. It’s responsive for a turbo engine, too, with only a fractional delay between throttle applications and drive arriving at the rear wheels. The switchable sports exhaust teases a rude, thundering soundtrack from the V8. At idle it sounds as though it has twice its 4-litre capacity, which all the better enjoyed with the roof down. 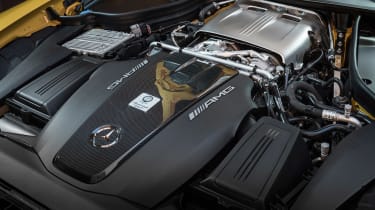 The gearbox, meanwhile, is among the best in the business with fast and responsive shifts in manual mode.

On longer journeys, however, the GT C does wear its occupants down with excessive road noise and sparsely-padded seats that feel unyielding after a couple of hours.

Although we haven’t driven the GT C Coupe yet, on the evidence of this test drive there are very few compromises inherent to the Roadster model. It doesn’t feel wobbly or burdened by unwanted mass, and the cabin packaging is completely unharmed.

The £139,445 the Mercedes-AMG GT C Roadster faces very stiff competition from the Audi R8 Spyder and Porsche 911 Turbo Cabriolet. The £132,020 Audi has the more exciting engine – its normally-aspirated V10 is one of the most thrilling road car engines currently being built – while the £137,553 Porsche feels even faster than the GT C and would be easier to use day-to-day.