Electric car innovator and energy company Tesla has quietly announced a set of mechanical – or would that be digital? – upgrades on its Model S and Model X SUV. The changes are specific to performance improvements in all but the flagship P100D models and will be active on cars built as of now.

The Model X SUV also benefits from performance gains, with the entry-level 75D 1.1 seconds faster at 4.9, while the 100D will do the deed 0.5 of a second quicker at 4.7 seconds.

> Click here to read our review of the Model S P100D 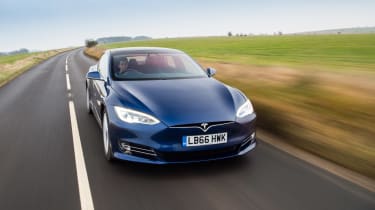 These figures are still a way off the headline grabbing P100D models that seem to be able to overcome any rival in a straight drag battle, but crucially they add some breathing space between themselves and the forthcoming ‘affordable’ Model 3 - itself said to hit 62mph from rest in under 6 seconds.

Tesla founder and CEO Elon Musk confirmed this week that development of the company’s crucial mainstream Model 3 is actually ahead of schedule, with the first deposit holders receiving their cars from the end of this month. Tesla is hoping that the production rollout will be smoother than the Model X, which encountered multiple delays before reaching customers.

Tesla has confirmed that these changes cannot be retrofitted on current models, pointing towards a hardware upgrade rather than software based upgrades we are used to seeing from the Californian company. Interestingly battery range across the board has remained unaffected, while prices are also the same as before, starting at £61,500 for the Model S 75 before any government incentives and rising to a frankly frightening £131,800 for the P100D.