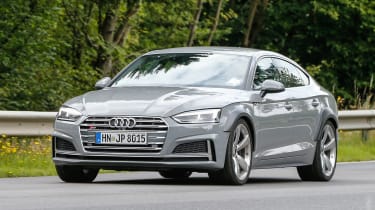 Large oval pipes, flared wheel arches and Nardo Grey paintwork usually means only one thing when applied to an Audi – RS. Now in its second-generation, the RS5 looks to be spreading into Sportback form, a body style the prior model was denied.

Previously only available in coupe and convertible form, the latest RS5 has dropped the previous car’s 4.2-litre V8 engine for a less charismatic 2.9-litre V6 twin-turbo. The peak power figure of 444bhp is identical to the previous car, but is supplemented with a broader, fatter torque curve some 125lb ft stronger than the previous V8 at 443lb ft.

The new power unit is connected to a rear-biased quattro all-wheel drive system and 8-speed automatic gearbox. The Sportback is expected to follow suit, mirroring the coupe’s drivetrain and chassis upgrades.

> Click here for our review of the new Audi RS5 coupe 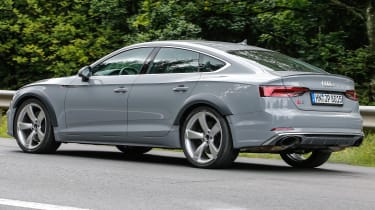 In coupe form, the RS5 will hit 62mph in just 3.9 seconds, on par with rivals like the BMW M4 CS, but with the added practicality of two extra doors and a hatchback, the RS5 Sportback might just offer a unique combination of performance and practicality in the market.

What the development of an RS5 Sportback does insinuate is the latest B9 Audi A4 saloon will likely not receive an RS treatment, instead being limited to an Avant model as before, which has also been spotted testing.

With the RS4 Avant rumoured for a debut at this September’s Frankfurt motor show, we expect the RS5 Sportback to be revealed later in the year.