Not as extreme as the GTS but more focused than the standard car, the BMW M4 CS is the most amenable and exploitable M4 yet. 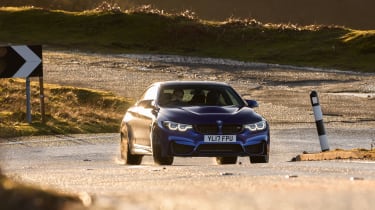 Even though the basic BMW M4 has come of age over the past year thanks to incremental updates, that hasn’t stopped the M-division making even more intense versions. The Competition Pack – with a little more power and retuned suspension – is the next step up from the basic car, while the GTS – with lots more power, water injection, a bespoke chassis, many lightweight parts, a huge wing and matching splitter – is the most extreme.

In the middle sits the BMW M4 CS, or Club Sport. It shares the same chassis setup as the Competition Package, but borrows the Michelin Pilot Sport Cup 2 tyres from the GTS. There’s the same carbonfibre bonnet as the GTS, with a deep cooling vent at the front, and the same sparse composite door cards reducing the weight to1580kg. That’s 32kg lighter than an M4 fitted with a DCT gearbox but still 70kg off the GTS’s low kerb weight. However, with 454bhp, only 10bhp more than the Competition Pack M4, it’s some way off the GTS’s 493bhp.

The M4 CS has the lower and stiffer springs, dampers and anti-roll bars from the M4 Competition Pack. The only other hardware change made to the M4 CS is the fitment of 265/35x19s front and 285/30x20s rear Michelin Pilot Sport Cup 2 tyres on lightweight forged wheels.

Pilot Sport 4 tyres are available as a no cost extra, but Frank van Meel and his team at BMW’s M-division focused on tuning the CS’s chassis to get as much from the Cup 2s as possible. Both the M Adaptive Dampers and the electronic power steering have been reprogrammed to suit the tyre’s characteristics. The front tyres were chosen to improve the car’s steering precision, the wider and larger rears to increase grip and get more from the Active M Differential. The aluminium front and five-link rear suspension are identical to that of a 2018 model year M4 Competition Pack. The only mechanical change to the powertrain is the fitment of a more free flowing exhaust system.

Away from the dynamic upgrades the M4 CS is also the recipient of a number of weight saving options. The bonnet has a large air vent positioned ahead of the power dome to draw cooling air through the new front apron, itself featuring a larger air intake. Manufactured from carbonfibre-reinforced plastic, the CS’s bonnet is 25 per cent lighter than an M4’s bonnet. There’s also a carbonfibre front splitter and, as with all M4s without sunroofs, the roof skin is made from the same material. At the rear there’s a gurney rear spoiler and a diffuser both formed from carbonfibre. All this combined with the lighter front seats and naked door cards from the GTS, means the new CS is 32kg lighter (1580kg) than an M4 fitted with a DCT gearbox.

There are no mechanical changes to the CS’s engine, which explains the modest power increase; only 10bhp more than the Competition Pack. The GTS’s near-500bhp is partly possible thanks to the addition of a fluid injection system that sprays deionized water into the pressurised intake air to cool it and make it more dense.The extra power arrives in a peak of 454bhp produced at 6250rpm and there’s a maximum torque figure of 442lb ft available from 4000-5380rpm, a 37lb ft increase.

Only the seven-speed M DCT dual clutch gearbox is offered with the CS due to the need to chase numbers, which are quoted at 3.9-sec to 62mph (against a regular M4 at 4.2-seconds), a 174mph maximum speed and a 7min 38sec Nurburgring lap time.

The changes BMW has made to the 2018-model year M4 Competition Pack are impressive enough. Gone is that layer of disconnect that the original car possessed, you no longer struggle to find the confidence required to dig deep into the M4’s reserves and enjoy its obvious talents. There was always a frustration that the M4 had much to give but BMW had made it frustrating to access it. The Competition Pack addresses these issues, the new CS improves on this further still.

Being able to drive the CS back-to-back with the latest M4 Competition Pack on the former’s launch highlighted that the 10bhp and 37lb ft gain counts for very little in terms of pace. However, the CS does have a stronger top end to enjoy and the new exhaust makes a far nicer, more authentic noise than the regular M4’s pipes combined with the augmented digital sound from the speakers. 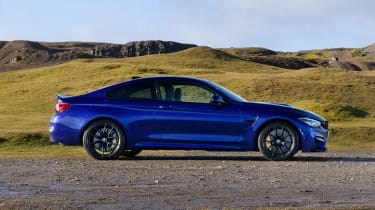 There’s a new found level of focus and precision to the CS. Within only a few miles of committed driving it becomes clear that van Meel and his team has poured over every detail of the M4’s DNA and improved upon it.

Take how the car reacts to your steering inputs and turns in. Where previously there was an uncomfortable dead spot where it seemed to take a moment too long for the front tyres to react, the CS addresses this with a clarity and level of precision that creates instant confidence. The gripper compound of the Cup 2 tyres are an obvious factor but the steering and set-up changes provide greater confidence to commit on turn in and a much clearer sense as to how the front tyres are working.

Once hooked into a corner the CS feels so much more stable and better balanced, too, the chassis allowing you in to position it so much more cleanly at the apex and ultimately get on the power and work on your exit speed. Not always something that’s been possible in an M4. 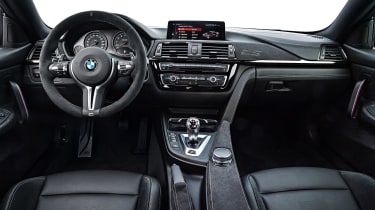 You can play the hooligan in the CS if you wish, the engine is certainly strong enough to break rear traction, but it’s so much more rewarding and satisfying to be able to open the throttle earlier in the corner and drive through the exit, feeling the diff hooking up and the chassis working the load with new found precision.

This is in the dry, however. Once the tarmac gets cold and wet the advantages of the Cup 2s diminish, and the CS becomes as unmanageable and as traction limited as the early M4s. Front-end grip remains strong but you have to be very cautious with the throttle if you want to keep the CS pointing forward. The poor traction and standing water highlight how focused the chassis is; it feels twitchy and unsettled in a way it simply doesn’t in the dry. The changes made to the CS do make the M4 a more capable and confidence-inspiring car to drive quickly, however, while shifting its operating range higher, the alterations also make that window narrower.

The transmission is the weak point of the drivetrain. It’s not as swift and fuss-free as the latest dual-clutch gearboxes – up-shifts cause a jolt through to the rear wheels upsetting the vehicle, unless it’s set to its least aggressive mode. However, once wound down, the gearbox starts to labour over downshifts. There’s no way of having the calm upshifts and swift downshifts for some inexplicable reason. 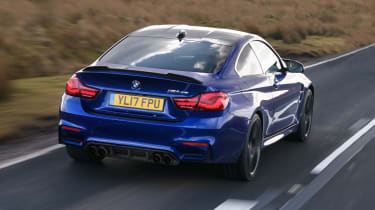 The CS comes as standard with cast discs with four-piston calipers at the front, two at the rear and put simply they are not a match for the car’s performance. The biggest criticism is it takes very few committed stops for the pedal travel to lengthen, and while retardation doesn’t suffer at a similar rate, it removes the precision required to get the CS slowed and turned in. The optional ceramic brakes solve all of these problems.

The savage torque delivery from the M4’s turbocharged straight-six has never been much of an issue when on a circuit. Previous M4s were always traction compromised and setting a fast lap time was all about taming oversteer, but acres of space and a smooth surface meant it was manageable.

However, the wider, stickier tyres, as well as the minor chassis tweaks, of the CS mean that it finds significantly more traction on the exit of a corner than the old M4 could ever hope for. If you aren’t right on the limit of the tyres entering a corner the CS, almost always, allows you to use full throttle right from the apex without burning up the rear tyres. 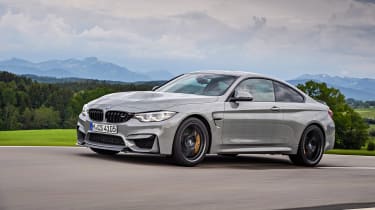 Brake later, carry more speed and bring the CS closer to the edge of grip and you can overwhelm the rear tyres easily. But, rather than simply spining the rear tyres needlessly, the CS gives you the ability to use the throttle to manipulate your line and precisely keep the car right on the edge of traction.

There’s even a degree of control once the tyres have lost grip; the revs don’t flare instantly and the rear wheels continue to thrust you forward as they claw away at the tarmac.

What’s more, improving rear-end grip hasn’t had a detrimental effect on the M4’s balance. The front-end’s reluctance to understeer was, by far, the most impressive attribute of the previous non-CS models, that characteristic hasn’t been eroded in the pursuit of greater rear traction and the CS has a laser sharp front-end. 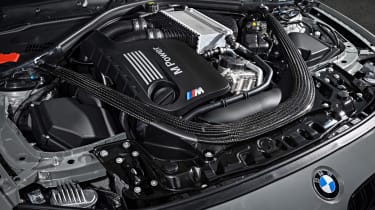 As we haven’t been impressed with the CS’s steel stoppers on the road, you’d expect the standard brakes to be miserable on track. Thankfully, they’re not too bad. After a few laps of hard driving you can expect the pedal to become squishy and indistinct, taking away much of the confidence you have in the brakes. However, despite the long pedal, there’s still enough power to slow the car from high speeds when you need to. A firmer pedal for longer would give you the assurance you want went driving a car on track. We’re yet to try the optional ceramic brakes on a circuit.

> Aftermarket car brake upgrades: are they worth it?

£89,130 is an obscene amount for an M4, even one that won’t be built in great numbers (the car isn’t a limited run model but production will be kept to a minimum by factory capacity). It’s an especially hard figure to swallow when the new M4 Competition Pack answers many of our criticisms of the standard M4. But the CS is mightily impressive, not only in the way it drives but how it makes you feel; it is the best M4 you can currently buy. The pared back interior is special enough to stand out without the impracticality of the more extreme GTS.

Perhaps the nearest rival to the M4 CS is Porsche’s £87,335 911 Carrera S, a twin-test we need to set up sooner rather than later.