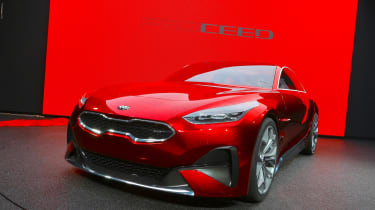 Kia’s designers have been on a roll in recent years, but the latest concept to come out of Korea looks more striking than any that have come before. After teasing a image of a concept, Kia  released more details on its stylish secret machine. Finally, the concept was shown to the public during its inugaural public outing at the 2017 Frankfurt motor show.

The concept is a shooting-brake with a curvaceous roofline accentuated by the absence of B-pillars, but still wears four doors. Kia says it represents an entirely new bodystyle for the brand – suggesting it sees it as more than just a humble estate. It’s described as an ‘extended hot hatch’. 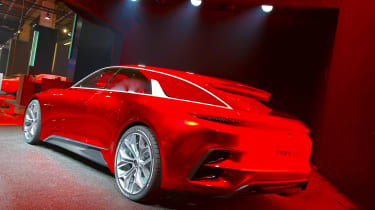 Gregory Guillaume, Chief Designer Europe for Kia Motors, said: ‘With many European drivers now seeking performance alternatives to the three-door hot hatch, we began thinking about a different halo model for the cee’d family. The Proceed Concept represents a bold new vision of how the vibrant soul of the pro_cee’d could be reincarnated and revitalised for a new generation of performance-oriented drivers.’

Shades of different cars abound on the images we’ve been shown. The overall shape is reminiscent of the latest Jaguar XF Sportbrake, with a similar chrome window line – but the full-width tail lights are pure Porsche 911, albeit with a hint of Kia Sportage about them.

The front valance design draws styling inspiration from the Kia Stinger GT: the ‘tiger nose’ grille is pinched vertically below the Kia badge (more pronounced compared to the Stinger) and the headlights that bleed back into the front wings are the key similarities. The sculpted, long bonnet gives the Kia a purposeful and aggressive stance. The stretched wheelbase houses six-spoke, 20-inch aluminum alloys at each corner. 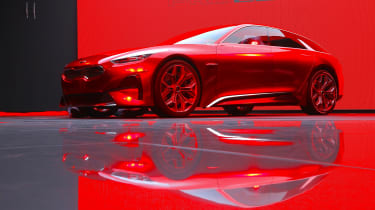 Kia claims the new concept retains the athleticism of the only real ‘performance’ car in its current portfolio – the pro_cee'd – but has real-world versatility to match. It goes one further by saying that this new concept could potentially preview the styling of the next-generation cee'd.

The new car is certainly a huge departure from the sharp-edged styling of the current cee'd. We’ll see the concept in the flesh at Frankfurt, but for now, we’re just happy that Kia seems to be continuing on the path it’s set up with the Stinger – the company’s most dynamic car yet.