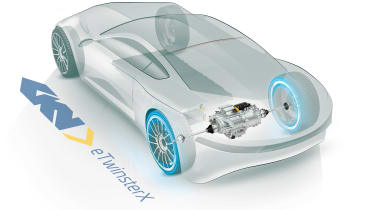 Vehicle engineering firm GKN has launched its new eTwinsterX drive system, which can provide manufacturers with an easy route to partial or full electrification of their cars. GKN has declared the new system fit for any passenger vehicle of any drivetrain layout.

The drivetrain guru has highlighted three areas where the system is unrivalled. The compact packaging of components has allowed eTwinsterX to deliver the same power output as a comparable system that takes up much more space. That means the Tetris-style approach of integrating such a system into a car is made easier, meaning it can be more widely implemented. Finally the axle motor drives through a two-speed transmission to deliver industry leading efficiency, according to GKN.

The inclusion of Twinster torque vectoring technology – initially pioneered for the Ford Focus RS, and the system that allows the RS to feature its Drift Mode – boosts both stability and agility.

GKN isn’t a household name, but its work reaches across the car industry: the Porsche 918 Spyder and BMW i8 are just two of the advanced sports cars that the specialist outfit has had a hand in engineering.

Car makers have sought help from GKN in development as they can achieve the desired mix of power and performance that they are seeking. The new eTwinsterX system is the next step in this process, and it has a wide scope for adjustment to meet the needs of the specific application.

The new eAxle system could coexist in performance cars with an internal combustion engine, with the former powering the front axle and the latter the rear. Electric power will provide additional torque at lower revs and offer extra traction when compared to exclusively rear-wheel-drive systems.

The weight compromise of all the hybrid associated componentry should be lessened, thanks to eTwinsterX’s lightweight construction. With the industry moving toward electrification in numerous forms, the new technology could feature in a number of new models in the future.