GKN’s complex drivelines make driving on ice easy. We explain why (with the help of video) 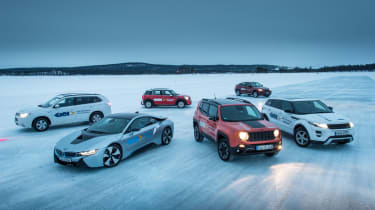 Hands up those of you who know which company makes the BMW i8’s two-speed eAxle. I’ll give you a clue: the answer isn’t BMW.

If your hand is down, don’t worry, because it’s not likely you’d have come across GKN's name outside of an engineering workshop. More familiar with working behind the scenes, the British firm is responsible for creating important components for the drivelines for some of the world’s most technologically advanced production cars. But it doesn’t expect us to know that. 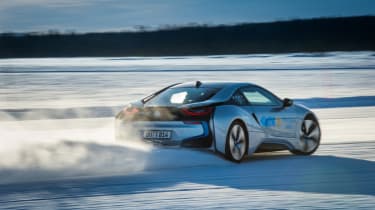 The poster boys of GKN’s products include the i8, Porsche 918 Spyder, Range Rover Evoque and perhaps most interestingly in 2015, Ford’s forthcoming Focus RS.

The thing is, most buyers won’t know that the systems helping these cars transmit power to the road are GKN’s, and even fewer will realise how much work these systems are doing. GKN wants to change that.

The company wants buyers to understand that the reason the BMW i8 is able to use smaller electric motors - without hampering performance - is because of its two-speed eAxle. And the reason the Range Rover Evoque feels significantly lighter than its 1640 kilograms, is because the Twinster system fitted to the rear-axle makes it incredibly agile. 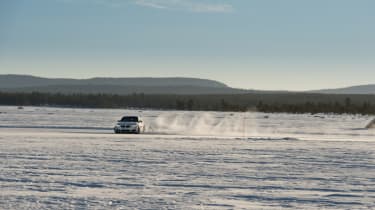 In order to demonstrate how the systems work, GKN flew a group of unsuspecting journalists over to the snowy climates of Sweden, to its test track in a small town called Arjeplog. But this is no ordinary test track, because GKN’s circuit is located on a frozen lake. And the first car I find myself beside is, lo and behold, a BMW i8. I waste no time in lifting open its featherweight door.

Despite wearing proper winter tyres (unstudded, I must add), just small prods of the throttle confirm the i8’s 357bhp is more than a match for the lake’s frozen surface. There are just a few centimetres of ice between my backside and a lake full of hypothermia-inducing water, but right now, I’m just hoping I don’t plow the car’s carbon nose into a snowbank.

I’ve left the car’s electronic stability control on as I enter GKN’s circular circuit. The circle has a 250-metre diameter, so there’s plenty of space to play with, yet no matter how hard I try the i8 won’t step into a slide. My passenger, a GKN engineer, gives me the ‘man up’ look and suggests switching off the ESP.

I hesitate (do I really want to steer a £100+k sports car on ice, unassisted?), click the button, and power on. 184lb ft of torque arrives instantly – that’s the joy of an electric motor powering the front axle – with a further 236lb ft arriving as revs rise in the three-cylinder engine over my shoulder.

Rather than firing me into a snowy landscape, I immediately feel the rear begin to widen its approach. Before I know it, I’m managing a slide, and to my surprise, holding it around the curve. It takes only a couple of seconds to learn that gentle adjustments to the throttle and smooth but quick steering corrections are met with vast yaw angles and a resulting cheek-to-cheek grin.

Three laps of drifting in I ask the engineer if the ESP is still partially switched on - there’s no way I could be sliding an i8 around with such precision this early on, surely. While his response omitted any relation to natural talent, I was still surprised to hear him say that it was in fact the i8’s eAxle helping both ends of the car work together. 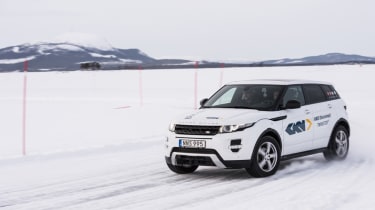 In helpful layman’s terms, he said that rather than killing the front-axle’s motor at high speed, the eAxle’s two-speeds enable drive to the front to remain constant, offering proper all-wheel drive at all speeds. Most other hybrid-electric cars cut electric power above a certain speed.

Considering the i8’s two axles are completely independent – they each use different powertrains after all – this is incredibly impressive. It manages power so effectively that the i8 doesn’t feel lacking without a rear limited slip diff or front active torque vectoring.

This system proves equally impressive on GKN’s twisty handling track, and it’s only when I forget my name doesn’t end with Loeb that I slide the car sideways into a snow bank. Thankfully, GKN has a winch-equipped Land Rover Defender on standby for when us journos run out of talent. Let’s just say there’s a busy day ahead for the old Landy… 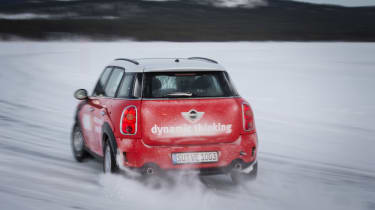 After my go in the i8, I jump into a prototype Mini Countryman. Though it looks completely standard, the Countryman is in fact equipped with GKN’s Disconnect driveline, complete with Twinster clutch packs. Production Minis don’t use this system - BMW decided they don’t need it - but as I head back onto the lake, I quickly realise it's effectiveness.

Key talents of the AWD Disconnect Twinster system include its ability to run the car as pure front-wheel drive above 22mph; disengaging the rear axles’ clutches lowers rolling resistance, saving fuel when cruising. When power is needed out back, the system automatically engages the clutches – taking just 300 milliseconds – and drive is sent rearwards.

The rear axle features two clutches – one for each wheel – enabling power to be independently controlled. This allows the system to control torque (aka torque vectoring) and act like an electronic limited slip differential. Sounds promising, but how does it translate on the ice? 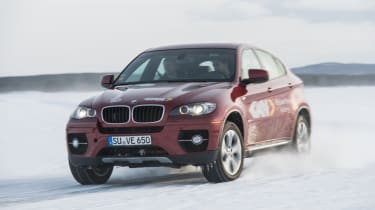 I’ll admit, I didn’t think my smile could get any wider than it was when in the i8, but GKN’s demonstrator Mini Countryman was about to prove me wrong. Ok, so third gear whines loudly (this doesn’t help stop the WRC related fantasies in my head), and despite the odometer confirming it's faced thousands of hard miles, the Mini feels as agile as ever.

On the handling track, the system’s ability to send power to the outside rear wheel enables me to muster up ridiculous slide angles. If it all gets too much, I only have to ease off the throttle and almost immediately, the car begins to straighten up. More throttle, more slide; less throttle, less slide. It’s that simple.

The Evoque (which features a production version of the same system) I jump into after is much the same, albeit from a higher vantage point. I begin to develop a rhythm, angling the Evoque’s nose at apexes and gently sliding its tail towards exits. Not even the promise of a moose soup lunch can draw me back to GKN’s lakeside hut. 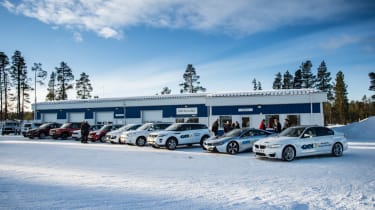 So what did I learn from my frozen lake experience with GKN? Firstly, nothing can top the confidence a sorted four-wheel drive system provides in slippery conditions.

Secondly, we might be hearing quite a bit more about GKN Driveline in coming months and years. Given the talents of its current product range, which also includes electronic torque vectoring and other intricately complex driveline systems featured on the other pictured cars, it's safe to say this is a very good thing.

Oh, and thirdly, I learned that driving on ice is bloody fun. Really bloody, seriously fun.