The first of 70 examples to be produced are set to hit the road this month, following its reveal late last year 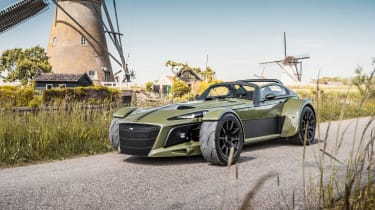 Birthday cakes are all well and good, but how about a supercar made to honour your special day? Well, that’s exactly what Donkervoort has done, celebrating company founder Joop Donkervoort’s 70th birthday with the limited-run JD70, an evolution of its successful D8 GTO range.

Though it features all of the special-edition branding you’d expect, tweaks don’t stop there. An entirely new carbonfibre body adds 80kg of downforce at the rear and 50kg at the front over previous models, allowing it to achieve a rather ridiculous 2 Gs of lateral acceleration, even on its standard road-legal semi-slick tyres – that’s on a par with the £750k-plus McLaren Senna.

Power comes from the same 2.5-litre turbocharged Audi five-cylinder as in the D8 GTO, with a healthy bump in power over that of the previous flagship car. Some 415bhp and 383lb ft of torque are sent to the ground through a five-speed manual gearbox, exerting 1.02 G on occupants under acceleration, higher than the force of gravity. A 0-62mph time and top speed are yet to be announced, but will likely improve on the 2.8sec and 167mph figures of the current range-topper.

The brand has also said that driver aids will be kept to a minimum, bucking the industry trend and strengthening driver-machine connection. Work with Bosch to include trick auto rev-matching software and features such as full-throttle upshifts has been undertaken, however, allowing drivers to extract every last drop of performance. 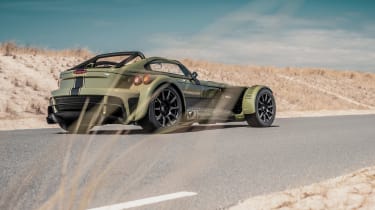 No exact weight figure has been provided as of yet, but it has been said that it’ll undercut the 700kg mark, likely matching the 695kg figure of the Bare Naked Carbon Edition. These numbers are achieved through the use of the brand’s EX-CORE® carbon technology, an engineering feat that gives the chassis a staggering total weight of just 54kg. Over 95 per cent of the model’s bodywork is constructed from carbon, and even the battery is lightweight, saving 7kg over a standard unit.

Donkervoort managing director Denis Donkervoort said: ‘The JD70 is the distillation of everything we know and everything we’ve learned on the road and the racetrack, from trackdays and from customer talks and, of course, from Joop’s own ideas on what a supercar should be to its driver.’