It’s take two for the model that saved Aston Martin, as ex-Jaguar chief designer revisits one of his earlier works 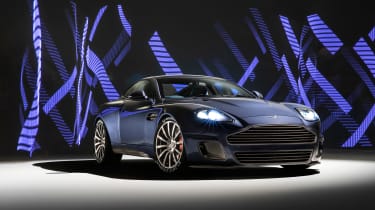 Ian Callum, the former head of design at Jaguar, announced his plans for a bespoke design company alongside news of his leaving the British car maker a few months ago. Now we have a visual representation of the kind of projects his new venture will undertake.

Before Callum’s successes in bringing Jaguar design into the 21st century, he was also the pen behind one of Aston Martin’s most important cars in recent history, the Vanquish, a model that he has now returned to with Callum Automotive.

The proposition is a ‘modernisation’ service for the Vanquish, which will be the first in a series of ‘R-Reforged’ models that will be endorsed by Aston Martin itself. Overall the design doesn’t deviate far from the original, rather it’s an exercise in the use of contemporary technology and materials to enhance areas of the 2001 original that were compromised due to cost and time constraints.

So the Vanquish 25, as the car has been called, gains bespoke carbonfibre bumpers, new wheels and updated lighting units. The window trims have been freshened-up with carbonfibre replacements, while the chrome roof rails and rear screen hoop have been replaced with fresh trim too. Look closely and you’ll spot more expressive design by the sills and in the geometric mesh that’s also referenced in embroidery work on the rear parcel shelf and trim. 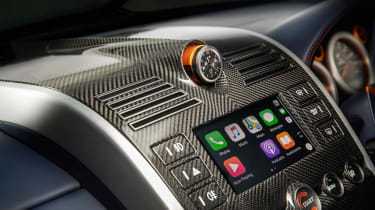 The wheels are all-new forged items, but mimic those seen on the Vision Vanquish Concept that preceded the road-going version by around two years. The lights are filled with very 21st-century LED elements. And the interior, arguably the easiest place to quickly modernise a car of the Vanquish’s era, has also been reformed, with extensive use of carbonfibre and a new central console featuring a small display and a mounted Bremont timepiece perched on top.

The Vanquish 25 also gains some changes under the skin, starting with the liberation of a further 60bhp over the standard 5.9-litre V12, raising peak power to 580bhp with help from upgrades to the engine’s intake and exhaust systems. It’s also possible to replace the problematic single-clutch automated manual transmission to a more reliable torque converter.

How much for all this work? £550,000, including a donor car, but not including local taxes. There’s no doubting the extensive nature of the upgrades, but how many people will actually be willing to spend so much on a car still yet to be worth anything close to that sum in standard form remains to be seen.