Ahead of the first A110 customer deliveries Alpine has announced a one-make race car, the A110 Cup 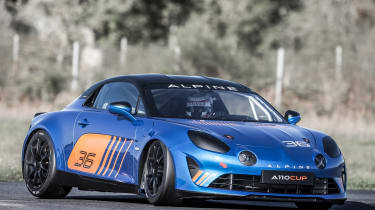 On the run up to the eagerly awaited debut of the A110 Alpine has introduced a Cup model which will be the centrepiece of a one-make, customer race series set to get underway in 2018.

All participants will be sitting behind the wheel of a race-honed version of the road-going counterpart. Signatech, who run Alpine’s A470s in the FIA World Endurance Championship, has been charged with equipping the A110 for six race meetings in 2018.

The car’s monocoque chassis has been modified to accommodate a roll-cage and extra bracing to stiffen the body-in-white while bespoke side members and a joint-welded subframe are included on the list of upgrades. The Cup sits 40mm lower than the standard car, riding on wheels shod in Michelin tyres, suspended by fully-adjustable Ohlins dampers. Six-piston calipers clamp onto vented discs  – 355mm upfront and 330mm out back – mediated by switchable and adjustable ABS.

> Click here to see our passeneger ride in the Alpine A110

The A110 Cup is assembled alongside the road car at Renault’s Dieppe plant. Here, the car is also fitted with a list of safety-based parts to meet FIA standards: Sabelt bucket seats, six-point harnesses and a fire extinguisher are a few of the changes. Mindful that some drivers may not be used to the intense cockpit heat that can be generated under race conditions Alpine’s engineers opted to retain the air-conditioning system.

Signatech has liberated an extra 18bhp from the blown 1.8-litre motor courtesy of a new air filter and exhaust helping to boost power to 266bhp. 236lb ft of torque – the same as the road car – is transmitted via a limited-slip differential and six-speed sequential ’box controlled via paddles mounted on an XAP steering-wheel. A digital instrument panel and myriad of switches for the traction control, radio and steering maps also populate the A470-inspired helm.

The series itself will kick-off in the summer of 2018, taking entrants across five European countries for twelve races over the course of six meetings. The curtain-raising race will be held at the Circuit Paul Ricard, before heading to Silverstone halfway through the season, eventually wrapping up at the Circuit de Barcelona-Catalunya.

They’ll be three separate competition categories: Overall, Junior (under 25 years old) and ‘Gentlemen’ drivers (over 45 years old). The victor of each will be due a share of the £142k prize fund at the end of the season. The Cup will cost approximately £90k and the estimated season running costs will account for another £90,000 on top of £36k in registration fees and deposits.