The Alpine A110 sports car is due in the UK in 2018. Get all the details of the new French coupe here 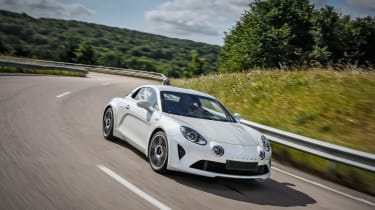 Two decades after French sports car manufacturer Alpine closed down, Renault revived the brand, unveiling the new Alpine A110 at the 2017 Geneva motor show. Since then we’ve received full details on the new car and been for a passenger ride to see and feel what it’s all about.

The new two-seat, mid-engined coupe inherits the A110 moniker and its retro-inspired styling from the famous Alpine sports car of the Sixties and Seventies. We’re due to drive the Alpine A110 before the year’s end, with UK deliveries expected in the first quarter of 2018. Can it really take the fight to the Porsche 718 Cayman?

Following the Alpine A110’s debut on British soil at the 2017 Goodwood Festival of Speed, it reappeared weeks later in Premiere Edition, launch spec at Salon Prive. The European allocation of Premier Editions has since been reserved, including all the UK cars, so Alpine has re-opened the order books and is taking deposits for non-Premiere Edition cars.

Alpine is still yet to confirm what will mark out the Premiere Editions from the standard A110 models. If our experience with the launch edition cars is telling, the additions over the basic model will comprise exterior tweaks, extra standard equipment and a heftier price tag.

UK cars aren’t expected on the roads until 2018 with right-hand drive versions currently testing. David Twohig, Chief engineer at Alpine shared a photo of himself behind the wheel of a right-hand drive example on social media. He captioned the photo, ‘for our many British and Australian Alpine fans: this photo has not been 'flipped'. Shakedown testing of the RHD A110 is well underway…’ Deliveries of left-hookers to the rest of Europe are due to begin around the turn of the year.

Speaking about the Alpine brand and forthcoming A110 at Salon Prive, Regis Fricotté, Alpine Director Europe and International said, ‘The original Berlinette handled winding roads with aplomb. It had it all; agility, lightness, the ability to become one with the driver, and with elegance to boot. We decided to bring back Alpine to give fans of performance driving the chance to experience this lost pleasure. It’s been years in the making and I can’t wait to share the car’ 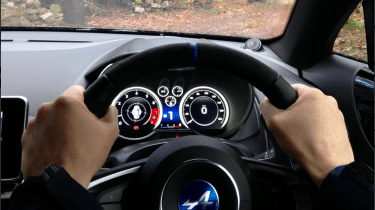 Only last month the Alpine A110 Cup was introduced to underpin a one-make race series. Stiffer, lower and stripped back, the Cup car is powered by an uprated version of the 1.8-litre turbocharged engine found in the road car, producing an extra 18bhp. The season kicks off in the summer of 2018 at the Circuit Paul Ricard.

The Alpine A110 is a huge car for the reborn Alpine brand and its proud parent Renault, so we jumped at the chance to take a revealing first ride with Alpine’s head of chassis development Terry Baillon.

The immediate impression is that from the passenger seat this feels like a very special sports car. “We have gone for maximum agility with this car” says Baillon as we drive at eye-opening speed through the French countryside. “By removing as much weight as we could, everything else is so much easier to get right”. 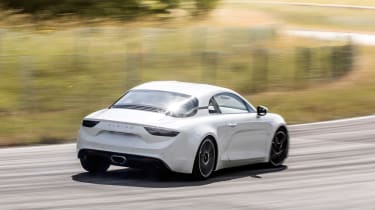 This approach is evidenced in the way the A110 feels so alert and poised to change direction, with any hint of inertia almost completely banished. The 1103kg kerb weight (with fluids and half a tank of fuel) combines with the 249bhp 1.8-litre turbocharged engine for a 226bhp per tonne power-to-weight ratio. The Porsche Cayman can only muster 225bhp per tonne and needs 296bhp to do it.

This is a properly fast car. If we had to put figures on it, they’d be 0-60mph in not a lot more than four seconds and 0-100mph in around 12sec. From the passenger seat the interior is simple but high quality. The ultra lightweight carbon seats are lovely and visibility is excellent for a mid-engined car.

The ride quality and suspension control is probably most impressive of all. Modes to adjust the engine, exhaust and gearbox maps are available as usual but the suspension and dampers remain the same in all settings. That goes against the current sports car grain and is a sign of the faith Alpine has in the set-up of its car. Putting it simply, it just works.

The A110 eases over the ground a little like an early Lotus Elise, in that it seems to offer massive grip and composure yet a superbly fluid ride. The springs and dampers never reveal any harshness, simply dealing with everything they encounter in the road surface. 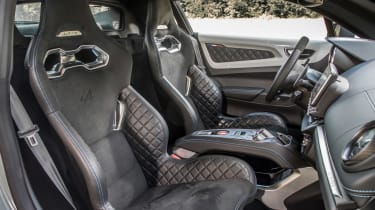 There’s some softness in the way the body rolls around corners but with the talented Baillon at the wheel, the overriding first impressions of the A110 are that it’s fast, composed and refined. For a four-cylinder turbo engine, it even sounds surprisingly good.

It seems that Alpine is already very close to getting it spot on with the A110. We eagerly await our first drive in late October/early November to find out how close.

Looking virtually identical to the Alpine vision concept of a couple of years ago, the production Alpine maintains a sloping roofline and gentle wraparound rear screen, both clearly inspired by the original A110. The new car counters these retro touches with very contemporary LED lighting signatures and surfacing to create a recognisably different look to anything else on the road.

Alpine confirmed the new sports car uses a completely flat floor and aerodynamic diffuser. Typically utilised on race cars and exotic supercars, a flat floor allows air to pass underneath a car efficiently while a diffuser ejects air out of the back cleanly, the combined efforts of each effectively speeding up the air below the car. This fast moving air helps creates downforce without the unwanted side effect of drag, something external wings and spoilers tend to create.

The flat floor and diffuser on the Renault Sport-developed Alpine mean that there is no need for any other wings or spoilers, and the body will remain uncluttered much like the marque’s A110 from the 1960s and 70s. 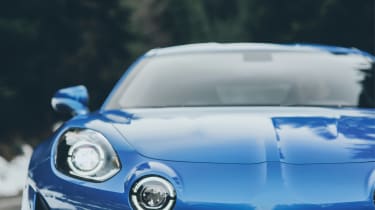 Both the chassis and body of the Alpine are formed from aluminium, chosen for its light weight - key to hitting the company's performance targets and competing with some tough rivals. The shots show a bare metal body, chassis and a set of front wings.

In keeping with the rest of the car – which uses an aluminium structure to keep the mass to a minimum – Alpine has designed some special lightweight bucket seats for the new A110.

The company claims a total seat weight - rails and all - of 13.1kg, said to be a reduction of around a half next to some competitors' pews. Like the seats in the Cayman GT4 the Alpine's chairs are fixed-back buckets, while Alpine has made a feature of the side-mount support rails.

While they look functional, they should also be comfortable - the seats are trimmed in quilted leather with a grippy, suede-like centre. The remainder of the cabin is trimmed in similarly luxurious materials, but sparingly so - all in the name of weight-saving.

Alpine has confirmed that the car will use a four-cylinder, turbocharged powerplant, and the firm’s images – cover your eyes, manual purists – show a car with two pedals and steering wheel-mounted paddles. Hopefully, Renault’s latest attempt at a dual-clutch transmission is better than that used in the Renaultsport Clio 200 Turbo.

The engine offers up 248bhp, and a low weight of just 1080kg ensures a 0-62mph acceleration figure of 4.5 seconds. For reference, the lightweight Alfa Romeo 4C reaches 62mph in exactly this time, while the Porsche Cayman GT4 shaves only one tenth from that figure.

Unlike the pared down (and cheap-feeling) Alfa cabin, Alpine is certainly presenting a premium feel inside its new sports car. The show car’s interior is a melting pot of leather, microfibre fabrics, aluminium and carbonfibre. Ambient lighting, an aluminium three-spoke steering wheel and TFT display give the cabin an ambience of considered quality. 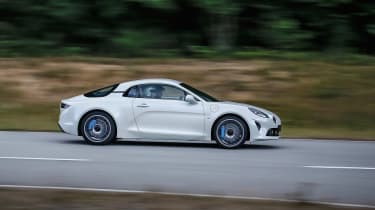 Alpine A110 prices and sales targets

Order books have already opened for the car, with the first 1955 examples being numbered 'Première Edition' cars - a number referencing the year the French sports car firm was established. French pricing will be between 55,000-60,000 Euros - around £46,000-£50,000. Alpine has noted a global premium sports car market of 200,000 cars each year, with 40 per cent of those in North America.

The company is hoping to seek customers sensitive to the marque’s history and culture, while the allure of Renault Sport engineering should ensnare a few more. We hope it's a good effort - Renault Sport has canned the Clio RS16 to ensure it has production and engineering capacity for the Alpine.