Mulholland Legend 480 is a TVR for 2020 - further details revealed 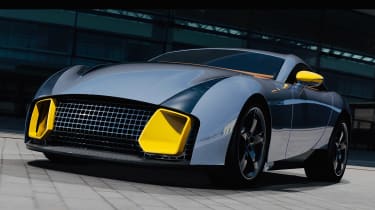 The Mulholland Group is best known for its work in motorsport, providing parts for the likes of F1 and WRC. To bring its expertise to a larger audience, however, it’s decided to create its very own sports car, bringing the TVR formula into 2020.

Designed to be a ‘true successor for the TVR recipe for the 21st century,’ the two-seat Legend 480 is a front-engined, rear-wheel drive sports car producing 480bhp from a naturally-aspirated V8. It also packs a six-speed manual gearbox and old-school driver appeal – just like the TVR Tuscan and Cerbera founder Graham Mulholland has previously owned

While full details are limited, Mulholland tells us the car is likely to use a 6.2-litre General Motors LS3 V8, while a roughly 1200kg kerbweight should result in keen performance. That gives it a very similar power-to-weight ratio to the new TVR Griffith, so a 0-60mph sprint of four seconds or under is possible.

The styling meanwhile also has TVR influence, but this is less of a surprise given Mulholland drafted in ex-TVR designer Damian McTaggart, responsible for the Tuscan among others. The overall shape looks not dissimilar to the TVR T400R to us, but with some thoroughly modern touches and, thanks to Mulholland’s composites speciality, a carbonfibre chassis 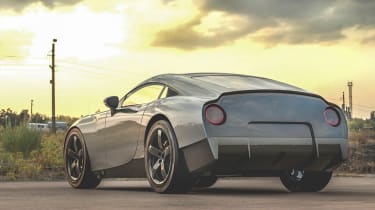 And that’s one thing that could separate Mulholland from the usual tales of woe that seem to accompany new sports car launches. The company already has a factory, turning out parts for everything from Grand Prix cars to some of Britain’s upcoming hypercars.

Most of the car’s parts will be designed and produced in-house, Mulholland tells us, with only specialist items like the brakes, windscreen and certain interior components being brought in from external suppliers. And the engine of course, though that will get a dedicated ECU and some new internals, and Graham Mulholland notes that the car’s adaptability means the car could run something entirely different should a better engine deal come along. 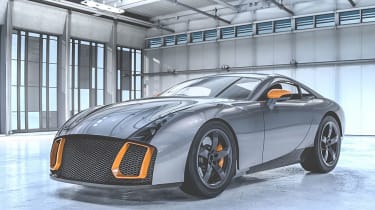 The company is also promising transparency through the car’s design, development and sales process, inviting potential clients along to its Derbyshire factory to better understand the car’s ethos. Mulholland says the company has already taken 45 inquiries, and while inquiries aren’t sales the interest does suggest there’s a potential market.

Despite the company’s fresh status, it claims that production will begin imminently at its Derby factory, with first deliveries set for July/August 2020. Order books are already open, with a basic car starting around the £90,000 mark and a “launch-specification” car coming in at about £130,000 - with potential owners invited to take part in the experience of building their cars.

Other models are already on the drawing board too, including a four-seater – another benefit of the company’s abilities to quickly design and build new carbonfibre components