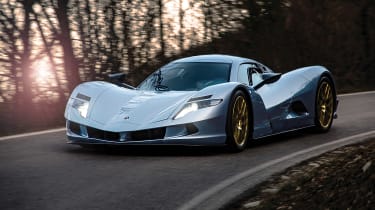 The automotive world has seen an influx of all-electric hypercars over the past few years, but this one in particular deserves your attention. Developed by the Japanese company Aspark, the zero-emissions Owl hypercar is claiming performance figures almost unheard of in road-legal hypercars.

Providing this, ahem, electric performance are a set of four Permanent Magnet Synchronous Motors, sending a combined 1984bhp (1480kw) and 1475lb ft of torque to all four wheels. As with many electric supercars, the Owl has total torque vectoring, with each motor powering a specific wheel independently from one another.

The motors are powered by a modest 64kWh battery pack, Aspark claims will give the owl a  280 miles of range on the old NEDC test cycle – for reference, that’s 56kWh down on the Rimac C_Two’s vast 120kWh pack and 6kWh down on the Lotus Evija. Thanks to 800V architecture, it’s said to charge from empty to full in only 80 minutes on a 44kW system. 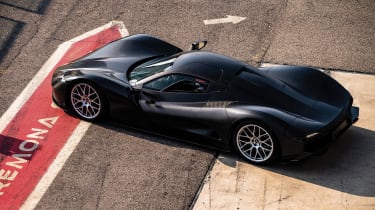 The Aspark Owl is no different to other electric hypercars when it comes to their inherent weight compromise, as although the carbonfibre monocoque and bodywork weigh just 120kg and 180kg respectively, total kerb weight sits at 1900kg. This is quite a hefty weight figure though, as the most focussed Evija specification said to provide a kerb weight of 1680kg despite its significantly bigger battery capacity.

To help keep the weight in check, double wishbone suspension, 10-pot front carbon ceramic brakes (4-pot rear) and an active wing are all included. Wrapped around its staggered 20 and 21” wheels are a set of sticky Michelin Pilot Sport Cup 2R tyres, 265-section front and 325-section rear - these are said to be the tyres used to record its incredible acceleration time. 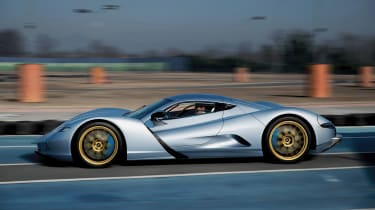 To match its striking statistics is an equally striking design, with a height of only 99cm said to be one of the lowest of any road-legal production car. To help make this marginally usable, hydraulic lift allows the driver to raise ride height by between 80mm and 160mm upon ingress, while what Aspark calls ‘falcon doors’ give it some added design flare.

Each of the 50 examples can be completely customised by the buyer and will be built in Turin, Italy by Manifattura Automobili Torino, the same company that brought us the modern-day Stratos. The Aspark Owl will start from €2.9m (c£2.7m).

> MAT Lancia Stratos to get a manual gearbox option