With a central driving position, push-rod suspension and 612lb ft of torque, the Audi PB18 is an electric car built to appeal to drivers 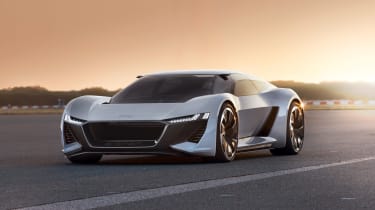 Audi has revealed an all-electric concept car, the PB18 e-tron, at this year’s Pebble Beach Monterey Car Week. Rather than concentrating on automated driving, app connectivity and being able to communicate with your bluetooth microwave, as is the focus of most new electric concept cars, the PB18 is designed to be an exciting drivers’ car.

The concept, with its aggressive shooting brake styling, takes half of its name from Pebble Beach and the other from Audi’s LMP1 car, the R18 e-tron that has formed the base for the PB18’s architecture.

> Read our review of the lastest Audi R8

Like the prototype racer, the PB18 e-tron has a pushrod-operated spring and damper unit on the front axle and pull-rod suspension at the back to reduce unsprung weight. Unlike the R18, however, both dampers use Audi’s adaptive magnetic ride system. 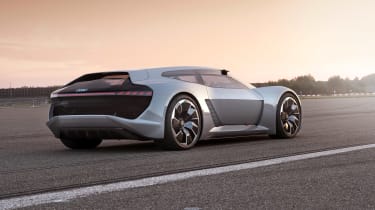 In true race car-style, you can alter the efficacy and balance of downforce the car generates, the diffuser can be lowered, and the rear spoiler extended. Neither can be changed within the car, however, and need to be adjusted manually.

Underneath the eight-spoke 22-inch wheels are 19-inch diameter carbon ceramic brakes. However, despite being so huge, this hydraulic system is only used for heavy braking when it combines with the car’s electric motors to slow it down. When touching brake pedal lightly, only the electric motors provide the braking force.

One element of the PB18 that you won’t find on Audi’s sports prototype racer is a temporary central driving position. Thanks to an entirely drive-by-wire steering and pedal configuration, the driver’s seat in PB18 e-tron can be moved to the side when carrying a passenger, or located in the middle for the ideal driving position when on track.

The PB18 e-tron isn’t fitted with each of these race car-borrowed elements for no reason, it has three electric motors – one that provides 201bhp to the front wheels and two at the back that give the rear wheels a total of 603bhp. The motors combine to give a maximum of 612lb ft of torque.

The two motors at the rear independently drive each wheel to allow proper torque vectoring and, as they are controlled by the ESC system, also increase traction. Thanks to its four-wheel drive system and considerable power, Audi claims the PB18 e-tron can accelerate from 0 to 62mph in a little over 2-secs.

Helping along that swift acceleration time is the PB18’s lack of body weight, tipping the scales at 1550kg, impressively low for an all-wheel drive electric car. This is achieved thanks to a body made from a mix of aluminium, carbonfibre and other composite materials, plus a complete lack of any autonomous driving or comfort features that would add further weight. 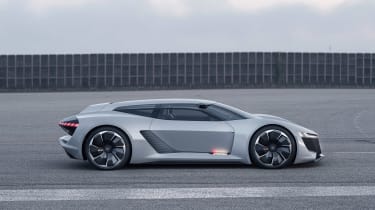 Powering the electric motors is a 95kWh capacity liquid-cooled solid-state battery that’s capable of being charged with as much as 800 volts, filling the battery in just 15 minutes. The PB18 is also fitted with wireless charging, so the battery can be replenished while it’s parked on an inductive pad without needing to be plugged in. When fully charged, the PB18 e-tron has a possible range of 310.7 miles.

The shooting brake silhouette might not be a conventional supercar look, but the PB18 has all the proportions of a hypercar. It’s 4.5-metres long, 2-metres wide, but only 1.15-metres tall with a 2.7-metre long wheel base – that’s just 4cm shorter, 3cm narrower and 6cm lower than a Bugatti Chiron.

> Find out what the Bugatti Chiron is like to drive

The shape of the PB18 isn’t the only exceptional design element, the trademark Audi grille has been replaced with, well, nothing. The single-frame shape is still apparent but rather than being full of plastic, metal or cooling radiators like conventional Audis, it’s completely open. Air that enters the opening is then directed up and exits via another opening ahead of the windscreen.

Sat low within the car, the driver can view the road through the front opening thanks to a transparent OLED panel between the steering wheel and the road. Information such as speed and a guide for the perfect line around a corner are displayed on the screen. When driving the PB18 on the road, navigation information is shown on the screen instead.

Not only is it refreshing to see a new concept car that tries to make electric propulsion exciting rather than just effective, but the PB18 shows how the format of electric vehicles, as they’re not beholden to the conventions of petrol-driven cars, can offer promising advantages to those who really love driving.