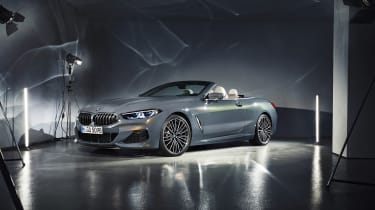 BMW’s push into the luxury market shows no sign of waning with the release of the very first 8-series Convertible. Based on the all-new 8-series Coupe, the Convertible is aiming to combine the hard-top’s impressive spread of capability, but in a more glamorous open-top package.

Like the Coupe, the 8-series Convertible operates in its own space in the market, being more aggressive and sporting than the Mercedes S-class Convertible, yet more laid back than a Porsche 911 Cabriolet. But it’s in this middle ground that the 8-series Convertible will likely find its niche, where it backs up its flagship status with a whole catalogue of BMW’s latest driving tech and luxury features.

Under the long bonnet will sit the same two engines as found in the Coupe – a 316bhp 3-litre straight-six diesel and 525bhp 4.4-litre twin-turbo V8 petrol. Both are connected exclusively to an eight-speed ZF auto ’box and xDrive all-wheel drive, which operates mostly in rear-wheel drive and only sends power to the front axle when slip is detected. An M8 Convertible will eventually arrive too, likely breaking the 600bhp barrier and featuring a smattering of tech derived from the M5 Competition.

For now though, the flagship model is the M850i, packing BMW’s next-generation V8 engine featuring two twin-scroll turbochargers nestled within the cylinder banks to create BMW’s own ‘hot-V’ engine. The V8 also features Valvetronic fully variable valve control and Vanos variable camshaft timing. The result is it’ll produce its peak 553lb ft of torque right the way from 1800 to 4600rpm. It will reach 62mph in just 3.9sec – 0.2sec longer than the Coupe – while top speed is limited to 155mph.

BMW worked hard to keep the Coupe’s weight under two tons (1985kg), but the Convertible, with its added chassis supports and roof mechanism, will likely cross the two-ton threshold.

Keeping the 8-series Convertible’s mass in check is BMW’s active anti-roll stabilisation system, mitigating excessive body roll by compensating for the movement with a pair of electric swivel motors on the axles. This system is also able to decouple the rigid points between the wheels on the straight-ahead, improving the ride when in its more demure driving modes. Unlike many rivals systems, BMW has not needed to fit an auxiliary 48V electrical system to power this tech, reducing both complexity and weight.

BMW has also fitted its active integral rear-wheel-steering system, which combines with the speed-sensitive and variable ratio power steering to help keep the cabrio agile. Underneath all this tech is a combination of double wishbone front suspension, and a five-link independent rear, built on a chassis constructed from a combination of aluminium, high-strength steel and carbonfibre.

The design has also been kept largely untouched, sharing the Coupe’s dramatic proportions, but with the added glamour of a soft-top roof. When stowed, the open four-seat interior looks vast, and BMW has clearly gone to great lengths to reinforce the luxury aspect, concealing the roof and its complex mechanism underneath a trimmed tonneau.

After our recent first drive of the Coupe, we were impressed by its sheer breadth of ability, but somewhat disappointed by its not particularly immersive driving experience. The question of whether the Convertible takes an even more laid-back approach might help define its character more clearly, but we’ll have to wait for a sunny day when it’s launched in March next year to find out.