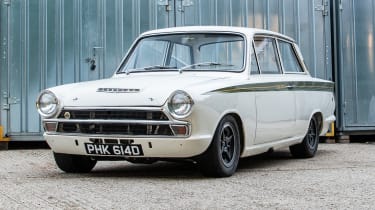 Early next year at the Autosport International show in Birmingham, Silverstone Auctions will display an exceedingly rare 1966 Ford Lotus Cortina, one of just three ‘Group 5’ works cars built by Lotus for the 1966 British Saloon Car Championship.

Driven in period by Jim Clark, Graham Hill and Jacky Ickx to name a few, this particular example has incredible racing pedigree. At between £180,000 and £200,000, its estimated sale price will almost certainly reflect this history, putting it in the running to be the most valuable Lotus Cortina ever sold.

The car was built in March of 1966 and originally assigned to F1 World Champion Jim Clark for use at Oulton Park in Cheshire. In June of 1966, ahead of the Grand Prix support race at Brand Hatch, BRM converted its four-pot engine to fuel injection before Sir John Whitmore achieved first in class, finishing in fourth position overall. 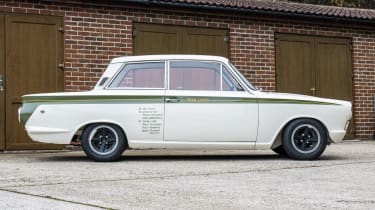 Success didn’t stop there, though, with further podium positions achieved in the hands of Peter Arundell, taking Team Lotus to first place in the Lombank Entrants Trophy.

Just a year after it was built, the Cortina ran in its last works event in style, with Graham Hill pushing the car to first in class and second position overall in the Race of Champions at Brands Hatch. Since then, it doesn’t appear to have been driven much at all, with just under 5,000 miles on the clock.

After undergoing a restoration, the car is in authentic condition with its original body shell and all of the suspension and engine modifications you’d expect to find in such a car. It might not be cheap, but if you have the cash to burn it’d be a great opportunity to get your hands on what has been quoted as “one of the most significant sports touring cars of 1960s”.