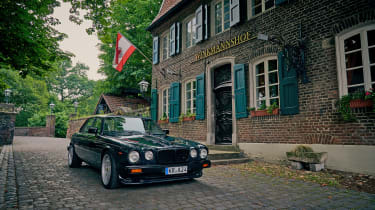 During the early 80s heights of German tuners creating wonderful autobahn-bashing models like an the Alpina B7S or AMG fettled 500SL, modded Jaguars were also on the menu thanks to companies like Arden and, in particular, its AJ 4.

The AJ 4 used a Jaguar XJ12 as a base before fettling it with a range of subtle yet substantial updates. Now, 37 years after the original AJ 4 was built in 1982, the tuner has decided to do a recreation, constructing a further 235 units - if, and this seems like a significant if, it can find enough rust-free Series III XJ12s to build them with.

> Click here for our review of the modern Jaguar XJR575

Starting under the forward tilting bonnet, new AJ 4s will benefit from a modified version of the original 5.3-litre HE V12 engine. As was the case in 1982, the fuel injected unit will be raised from the standard (German market) 261bhp, to a more punchy 316bhp with changes to the (very simple) ECU, a bespoke intake manifold and a free-slowing sports exhaust. The four-speed auto transmission (which was engineered by Arden in the first place) is also mildly uprated, keeping that extra grunt in check.

The XJs suspension and chassis has also, thankfully, been paid some attention. New, modern springs and dampers help contain the body’s movement without affecting the ‘magic carpet’ ride while uprated brakes work on 18-inch forged wheels with modern tyres.

The XJ’s svelte bodywork is also given a subtle overhaul, complete with the previous Arden AJ 4’s black, ribbed Daimler-like front grille and substantial de-chromeing of the bodywork. As per so many of these high-end retrospective models, final colour and trim is completely up to the individual owner’s discretion, although we suspect the dark racing green exterior, and Oyster-coloured interior will be a popular choice among many.

The first car in the new Arden AJ 4 series has already delivered to its new owner but information on how much this car will actually set you back remains elusive.