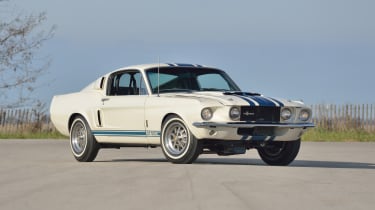 The world’s only 1967 Shelby GT500 Super Snake found a new home last week, after selling for $2.2m (£1.5m) at the Mecum auction in Kissimmee, Florida. Aside from being unique, the car has a number of impressive accolades to its name.

The mad creation came to fruition when Carol Shelby was asked to participate in a promotional event for Goodyear tyres. It was decided that a supercar that would ‘outperform anything else in the world’ would be used for the job. Shelby took an existing GT500 and dropped a Ford GT engine into its engine bay, essentially the same powerplant used in the GT40 MkII that had won at Le Mans the year before. It was said that the engine was ‘the mother of all 427s at that time… aluminium heads, aluminium water pump, forged crank, Le Mans rods, just basically everything inside the engine was built to run sustained 6000rpm – to race at Le Mans’. The final result was a 520bhp GT500.

Various modifications were also made to allow the car to run reliably during the 500-mile tyre test, including an external oil cooler, braided lines and a remote oil filter. To cope with the high-speed cornering forces it would encounter on the oval track, stiffer springs and shocks were also mounted on the passenger side of the car. Aesthetic design touches to distinguish the car from a standard GT500 include one-off chrome inboard headlight surrounds and unique Le Mans striping with two narrow blue stripes flanking a wide blue center stripe. The car performed flawlessly during the test, running at an average of 142mph and topping out at 170mph. 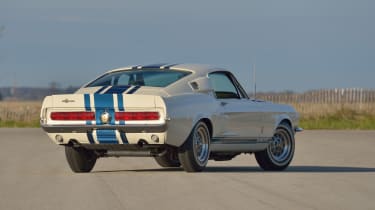 Despite original plans to produce a further 50 examples of the car for the public after the test, the 427-powered GT500 proved too expensive to put into production, with its predicted retail price well beyond its competition and twice the price of a base GT500. The car was sold after the test in 1967 for just $5000 and has covered only 26,000 miles since.