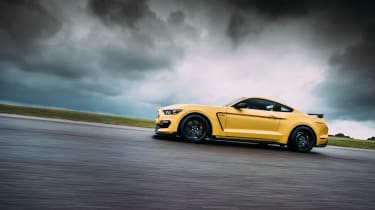 As inappropriate and ludicrous as the concept the Ford Mustang Shelby GT350R is – an all-American muscle car that’s been treated to some European-like performance mods to make it suitable for tracks, not drag strips – we’re still very glad it exists.

It’s not the first of its breed, though. Chevrolet’s lightweight, full-adjustable Camaro Z/28, with equally wide Pirelli PZero Trofeo R tyres front and rear, has already impressed us; it even found its way onto our 2015 Car of the Year test. And the Dodge Viper ACR is an even more extreme example still.

With a thoroughly revised chassis, a more exotic engine than a regular Mustang and, lest we forget, carbonfibre wheels, is the Shelby GT350R really a bonafide trackday machine? We headed to one of the UK's fastest race circuits, Thruxton, to find out.

Like the non-R GT350, this Mustang is equipped with a naturally aspirated 5.2-litre V8 with a flat-plane-crank; not the same engine as the 5-litre, cross-plane-crank V8 that you find in the standard Mustang. This more exotic engine puts out 526bhp and 429lb ft of torque, an extra 116bhp more than the standard car’s V8 and with only 0.2-litres more. This results in the engine being the most powerful naturally aspirated production engine Ford has ever built.

> Read our review of the entire Ford Mustang range

The more traditionally European style crank helps the engine rev higher; it has a redline of 8250rpm rather than the conservative 6500rpm limit of the standard car. Not only does it reach these giddy heights, but peak power is delivered 1000rpm higher than the more conventional V8 at 7500rpm, too.

The engine is mated to a new six-speed gearbox. The standard Mustang’s Getrag ‘box has been replaced by a Tremec unit with lower rotating masses to suit the high-rpm engine. The rear axle is fitted with a Torsen limited slip differential. 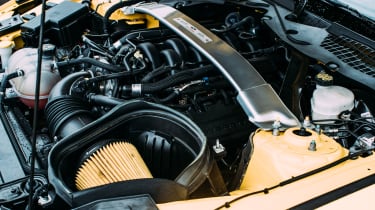 You might be aware that none other than Ferrari favours a flat-plane-crank in its V8 engines. But the GT350R doesn’t just share an engine configuration with Modena’s finest; just like many modern Ferraris, the Shelby is equipped with magnetorheological dampers.

Such dampers aren’t new, but they’re still technically impressive. Iron particles in the oil found in the shocks increase the viscosity of the fluid when it’s subjected to a magnetic field. That then increases the damper’s stiffness.

As well as the adaptive dampers, other aspects of the GT350R’s suspension hardware have been changed. There’s a new aluminium front hub that’s lighter than the ordinary Mustang’s, while at the back one of the rear coil springs has been wound in the opposite direction to the other side, so that the two corners of the suspension are an exact mirror image of one another. The supporting control arm has been altered to match.

Both front and rear anti-roll bars are thicker and rigid bushes have been used to support the subframes and suspension arms to increase precision. 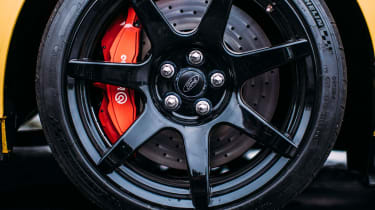 We only got to experience the GT350R on track. Not just any track: the intimidatingly fast Thruxton, and in the damp. Although that means we can’t deliver a thorough, conclusive verdict on what it's like in all aspects of the UK, we did manage to learn some very useful things about the car.

There’s not a lot about the inside of the 350R that screams that it’s the most track-ready Mustang you can buy; no roll cage, no fire extinguisher, no four-point harnesses. The seats look a little more racy, but they’re still soft and deeply padded. The rev counter that reaches to 8250rpm, some extra dials and an Alcantara rimmed steering wheel, with a Shelby cobra logo on the centre, are the only other real hints that it’s a little more special than your average ‘Stang.

At idle the engine sounds much like you’d expect of a muscle car, with a loud and low burble. It’s perhaps a little busier than the offbeat thrum from more traditional American V8s, but it certainly doesn’t sound out of place coming out of the back of a Mustang.

Blip the throttle and the revs rise, and then fall, a bit more rapidly than you expect of a big capacity V8. It feels energetic and easily excitable, it maintains that attitude when you’re moving and making the engine really work, too.

As the revs increase to over 4000rpm, the exhaust explodes with a thunderous noise. It’s very loud, and although not an unpleasant noise, it does mask any other sounds the engine might make. Just before the exhaust takes over there’s a hint there’s going to be some growly induction noise when the engine is under load, but the shouty exhaust cuts in and you can’t hear anything else.

What the engine does do very well is make the GT350R feel very fast. In a straight line it absolutely eats up the fastest sections of the track... which means it eats up pretty much the entire circuit. The acceleration is instant, too, and the car reacts to every little movement of the throttle. 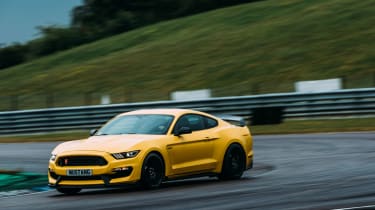 With such massive performance and a damp track, it's no surprise to find that the Shelby wants to spin its back wheels on the exit of slow corners. What is more surprising, though, is just how much grip its 325 section rear Michelin Pilot Sport Cup 2s find in the fast corners. There’s enough pliancy in the suspension for to you to be able to gently load up the outside rear tyre. Once you do it really grips and the car feels very secure, even on the damp Thruxton tarmac.

The chassis is far from too soft or imprecise, though. Initial roll is minimal and you only notice the suspension’s malleability under higher loads.

The GT350R is left-hand drive only, which, in a new Mustang, is a good thing. The fiercely hard and sharp over-servoed brake pedal from the right-hand drive car is gone. In its place is a softer, more progressive setup. Now, not only can you brake with better precision, but the longer pedal makes it easier to heel and toe on down shifts too.

This extra control with the middle pedal is essential because as you’re trying to slow the GT350R down for a corner, you do feel its true mass (1658kg). If you brake too late you can easily find yourself triggering the ABS very easily. Patience is the key; brake early, use the suspension’s pliancy and the control you have with the middle pedal to gently trail brake into a corner and the 305 front tyres find just much grip as the bigger rears.

We doubt this Shelby Mustang will become a trackday favourite throughout the UK, or even the world. It’s still a bit too much of a brute, and you can imagine your rear tyre and front brake bills being astronomical if you spent much time on track. However, the GT350R is more at home on a cicuit than any big, brutish muscle car has any right to be. It's agile, finds a surprising amount of grip and, if you do push it too far, it's very predictable. 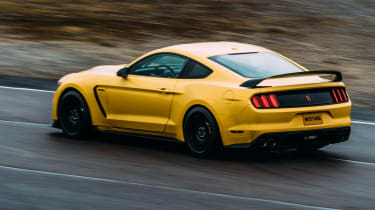 In America, the only place you can buy it, the Ford Mustang Shelby GT350R costs $63,645. As mentioned before, muscle cars turned trackday toys are nothing new. The Chevrolet Camaro Z/28 is no longer on sale, however the more powerful but less focused ZL1 is slightly cheaper than the GT350R at $61,140.

Dodge’s Viper ACR is almost twice as expensive as the more conventional muscle cars at $121,395. Despite not having carbonfibre wheels, the Viper is the most dedicated of three when it comes to the task of being a capable track car. 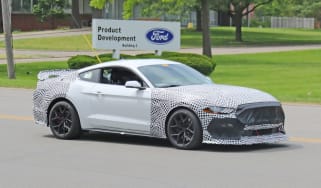