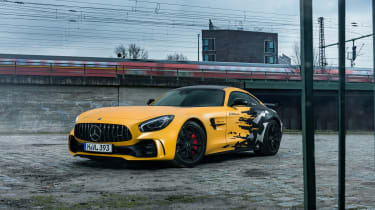 As if the 577bhp Mercedes-AMG GT R  wasn’t powerful enough, German tuner Fostla has given it even more. Thanks to the brand’s “stage 1” tune and the addition of a BMC racing filter, the track-inspired supercar now puts 641bhp (64bhp over standard) to the rear wheels through its seven-speed dual-clutch gearbox. Torque has also been increased from 516ft lb to 567lb ft, giving the model some extra oomph.

This new power figure brings the GT R in line with the track-focused, all-wheel-drive Huracan Performante, exceeding that of the new Huracan Evo. With the Mercedes-AMG sporting rear-wheel-drive it might struggle off the line in comparison, but flick its fancy GT3-inspired traction control system up a few notches and you might have yourself a surprisingly useable 650bhp.

Performance figures for the Fostla-fettled car haven’t been quoted, however 0-62mph for the standard car comes in a swift 3.6secs with a top speed of 199mph. We’d imagine the addition of 64bhp would help shave some time off the 0-62mph sprint and perhaps even tip the car over the 200mph barrier. 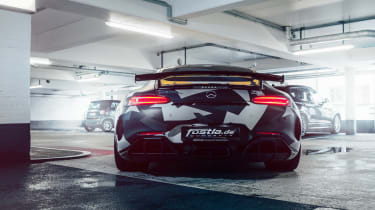 As seen in these pictures, Fostla tuning will also wrap the car in a rather bright vinyl livery to help you stand out, should a 641bhp V8 and ear-splitting exhaust note not be enough on their own.

The Mercedes-AMG GT R received four and half stars in our review, losing just half a star for losing some of its smooth-road composure on the UK’s notoriously craggy roads. This was something to be expected from a car developed at the Nurburgring, however, and certainly wasn’t a deal-breaker. We described it as having “stonking performance” in our review, making us doubt the need for extra power, but should you want to break the 200mph wall, Fostla might be the people to turn to.

Pricing information on the kit hasn’t been announced.