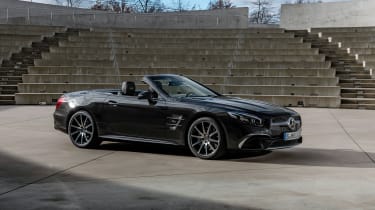 Ahead of the next-generation Mercedes-Benz SL, expected next year, the German marque has announced the production of a Grand Edition variant of the luxury drop-top, with a range of interior and exterior tweaks.

Due to hit showrooms next month, the special edition will come in both SL500 and SL400 forms, with the SL500’s 4.7-litre, 455bhp V8 pushing the model from 0 to 62mph in just 4.3sec. The Grand Edition can be ordered in black, white and various shades of grey, with chrome and matte silver touches on the front bumper setting it apart from the standard car. Staggered, diamond-cut ten-spoke AMG wheels as found on full-fat 63 models also feature.

SL Grand Edition badging also makes an appearance throughout the car, including on the mudguards, front wings and interior. A sports suspension system with a slight reduction in ride height, a driving assistance package, ‘Designo tundra brown pearl’ leather seats and the brand’s Airscarf heating system are also included. 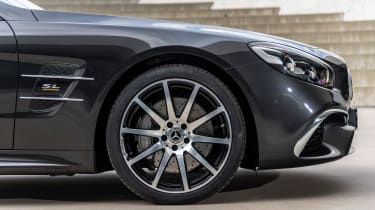 Sitting alongside the SL Grand Edition is the SLC Final Edition, marking the end of the current-model generation. Four engine variants, including the range-topping 390bhp 3-litre V6 SLC43, can be chosen, with prices starting at around £36,000.

Available in the same yellow shade seen on the SLK when it was launched in 1996, the Final Edition can also be optioned in other, more subtle colours. Choose black or grey and you’ll receive silver chrome accents on the front bumper, whereas with yellow and white, black accents on the front bumper, door handles and mirrors will make an appearance. 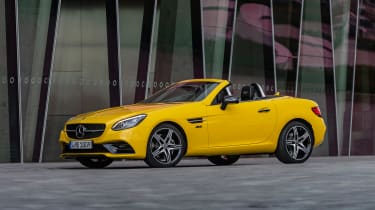 The Final Edition SLC also features an extensive range of optional extras as standard, such as sports suspension and a larger braking system, thanks to the AMG-line package. Interior and exterior tweaks can also be found, including new 18-inch five-spoke diamond-cut AMG wheels and the addition of Final Edition badging on the front wings and interior. Carbonfibre-look leather can also be seen throughout the cabin, which we’re not awfully keen on...

Both the Mercedes-Benz SL Grand Edition and SLC Final Edition can be ordered from 22 February and will hit showrooms next month.