Mercedes AMG SLC43 review - plenty of competition, so can it deliver? 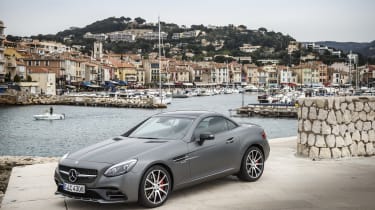 Mercedes-Benz continues it renaming exercise with the new SLC replacing the SLK, driven here in range topping AMG SLC43 guise. This new twin-turbocharged V6 model replaces the naturally aspirated V8 SLK55 and the introduction of the £45,950 AMG SLC45 completes AMG’s switch to turbocharged engines for all its models.

This new SLC heads into a fiercely competitive class, one which not only includes the much improved Audi TT and Jaguar’s F type but, of course, Porsche’s new turbocharged 718 Boxster S

The outgoing SLK has never been able to match the mid-engined Porsche dynamically, but with a 416bhp, 5.5-litre V8 behind its three-pointed star grille, the SLK55 always offered a brutal performance advantage over its Stuttgart rival. With the loss of two cylinders, over two litres in capacity and the addition of two turbochargers that USP has gone. 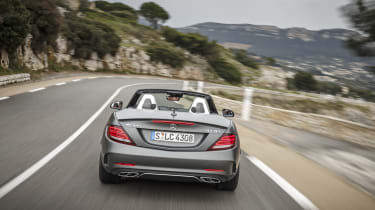 Despite the name change, Mercedes has played it safe with the SLC’s new look. Then again, the SLK celebrates its 20th anniversary in 2016 so messing with a proven formula wouldn’t have been the wisest of moves.

For the SLC there is a new front section that incorporates a more steeply raked grille to further elongate the arrow-shaped appearance of the bonnet. Both front and rear bumpers have also been updated and there are new head and taillights, too.

Inside, the SLC receives a new instrument cluster, including a larger 7-inch media display (up from 5.8-inches) and a new multifunction sports steering wheel finished in Nappa leather.

The metal folding roof can now be opened and closed at speeds up to 25mph and can also be specified, as an option, with Mercedes’ Magic Sky Control that allows you to adjust the light intensity of the glazed section of the panoramic roof from fully transparent to completely opaque depending on your mood. 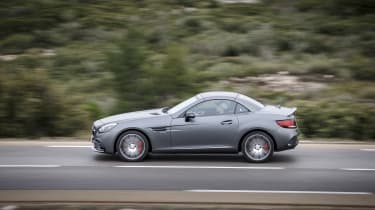 Mercedes 9G automatic gearbox is the only transmission offered with the SLC43 (only the 184hp, 2-litre four-cylinder engine can be had with a six-speed manual gearbox), but it does mean you get Dynamic Select as standard, which offers five distinct driving modes (Comfort, Sport, Sport+, Eco and Individual) that provide variations in engine, transmission, steering and damper settings.

Active Brake Assist is also standard in the SLC43. The system not only provides a radar-proximity warning and braking assistance, but it will also carry out autonomous braking should it detect a rear end collision. 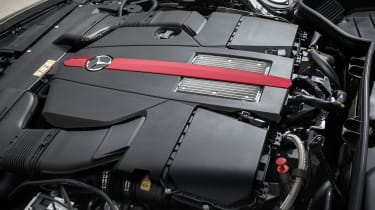 Despite its new name, under the SLC’s new look are underpinnings that are still very much related to the outgoing SLK, which means it’s not the most sophisticated of chassis but is still competent enough that you want to engage with it.

Select Sport + via the Dynamic Mode and the throttle loosens, the exhaust valve opens, the dampers take a firmer control and the steering gains a degree of weight. You’ll also want to select manual mode for the gearbox and turn off the stability control, the latter not because you’re a driving God, but its constant interruption will send you mad and the SLC is pretty well tied down and there’s a good workable level of grip to play with before the rear tyres become over whelmed.

This isn’t the first taste of this engine, it’s been available in various GLE SUVs for a while, but it’s certainly the most engaging application.

The throttle response is crisp and alert with the twin-turbos spooling smoothly and quickly to deliver the 420lb ft of torque at 2000rpm, and from there the SLC43 shows its hand over the out going V8 by revving much quicker and getting into its stride so much earlier.

Through third and fourth the pace takes on a serious edge and you need to be ready with your finger tips to pull another gear to avoid the slushy rev-limiter, but keep the V6 on the boil and it buzzes and thrives. Its no supersonic, large capacity naturally aspirated V8, but it’s one of the better transitions to turbocharged powert.

Up and across the Col du Braus from Nice to Sospel the SLC43 defies its age, rolls up its sleeves and does a pretty good job of eating up the hairpins. It’s not as sharp as a Boxster (the outgoing six-cylinder or in coming four), but it’s more involving and precise than an Audi TTS roadster, and sharper than Jaguar’s six-cylinder F type. 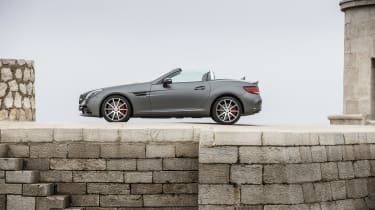 Its front end responds cleanly and sweeps a neat arc through the apex. The steering isn’t packed with feel, but it does allow you to place it accurately and hold your line while allowing you to make minor adjustments as you need them.

The body is well controlled, the SLC’s short wheelbase having that squat, wheel at each corner stance that makes for quick directional changes rewarding rather than breath holding moments.

As a cruiser, away from the Alpine passes the new SLC43 is refined, quiet and something you’d jump in and drive across Europe in without a second thought. Although your passenger may complain as they don’t enjoy the same amount of space as the driver does.

On UK roads the SLC43 is mostly very enjoyable. The engine is smooth and torquey but also pleasingly responsive. It also sounds good and with the Porsche Boxster dropping to four cylinders, the SLC’s V6 suddenly looks rather attractive. There are pops and bangs on the overrun but they’re not overdone, and the whole tone is nicely judged.

The chassis is playfully engaging too. Turn the stability control to its well-judged Sport setting and you can easily play the SLC out of tighter turns, dialling in a neat amount of opposite lock without it feeling ragged. It’s as well balanced as you would hope a front-engined rear drive car would be. In manual mode the nine-speed automatic gearbox provides snappy shifts on the way up the ratios,but doesn’t feel quite so responsive on the way back down.

Where the SLC43 falls apart slightly is on bumpier roads. The structure of the car simply doesn’t feel stiff enough, with far too much shake down a B-road. The AMG Sports suspension actually does a good job of tracking the road, but what it’s attached to can’t quite cope with the forces being transmitted into it. You notice it slightly less with the roof down as the exposure to the elements distracts you from the shudders, but it really should be better.

The SLC43 is slightly feeling the age of its underpinnings then, but on smoother roads it was arguably the more fun and better balanced than any previous SLK. With the 718 Boxster opening up the market like never before, the SLC43 is worth a look if you still crave six cylinders. 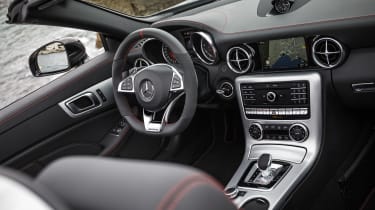 Beneath the SLC43 is Audi’s TTS Roadster. It’s both less powerful (310hp) and a little slower than the Mercedes, but it’s also cheaper to the tune of £3,455, which will be a big draw for some. The current TT is also a much-improved drive, although against the new SLC43 it will come unstuck when it comes to driver involvement.

The name change from SLK to SLC came to fruition because Mercedes wanted to closer align the two-seater convertible with its small-executive saloon, primarily because the new drop-top shares much of its technology with the C-class. Whether this results in the roadster eventually getting the C63’s monster twin-turbocharged V8 remains to be seen. Here’s hoping.