Facelifted Audi A5 Sportback spied testing ahead of reveal 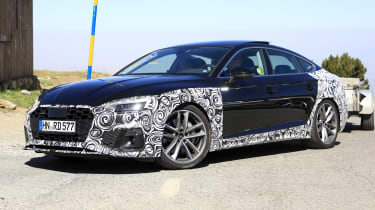 The Audi A5 Coupe, Sportback and Cabriolet are all about to undergo a gentle update in the next few months. Changes will include both updated visuals in line with the recently revealed A4, as well as a fresh set of powertrains, and a new infotainment system.

The model in these images is an A5 Sportback, in S-Line trim judging by the new lower fascias and skirts. As in the recently revealed A4, the outer intakes look to be framed by a thin trim piece, likely finished in either silver or black depending on the model. The grille is both lower and wider than before, and flanked by new LED headlights with Audi’s increasingly common geometric lighting signature.

The interior will maintain the same basic architecture, but feature Audi’s new touchscreen MMI system. Unlike larger models in the range, the A5 will only incorporate one touchscreen sat atop the dash, rather than the haptic dual-screen layout in the A6 and new Q7. 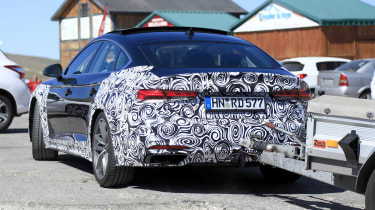 Powertrains will be shared with the recently updated A4 with the range comprised of a suite of four-cylinder turbocharged petrol and four- and six-cylinder diesel options. Most powertrains will feature a 12V mild-hybrid system, as is becoming near essential, with high-output V6 diesels adopting a chunkier 48V system.

Audi has already announced the new S5 TDI in the current generation model, swapping out the 3-litre V6 petrol engine for a new MHEV 3-litre V6 TDI engine, and that new powerplant will continue in this updated model. Also featured in the S4 TDI, the new diesel might concede a small amount of horsepower to the old petrol, with 342bhp (down 7bhp), but makes up for it with a massive 147lb ft bump in torque to 516lb ft.

With Audi’s increasingly diverse roster of models it feels like a new or updated Audi is revealed every month, and this one will arrive in the next few, while an updated RS5 coupe, and the new RS5 Sportback will not be too far behind.