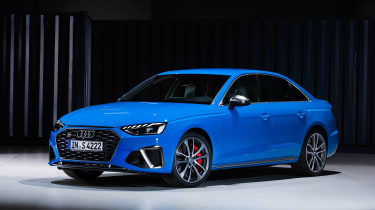 Audi has unveiled its heavily revised A4 to rival the new BMW 3-series and Mercedes C-class. The updates bring refreshed styling outside, new or heavily revised engines, and a greater emphasis on mild-hybridisation to the already comprehensive A4 package. Topping the range is a new diesel-powered S4 TDI model featuring a 342bhp V6 diesel engine, a far cry from the naturally aspirated V8s that featured 15 years ago, but perhaps one more in keeping with the automotive ecosystem of 2019.

Despite the increasing popularity of SUVs, the A4 continues to be the biggest seller for Audi, making up 20 per cent of total production. To keep it fresh Audi decided to go further than the usual facelift, not only updating the A4’s front and rear fascias, but also introducing a completely new body-in-white. In fact, only the boot lid, roof and bonnet are shared with the current B9 A4, signalling the importance Audi is placing on this update.

> Click here for our review of the new BMW 3-series

The new front end is the biggest visual change, with S line models picking up design details from elsewhere in Audi’s range including a lower and wider grille, more ornate detailing and an A1-style slip vent between the bonnet and bumper. The crease that defined the previous A4 has now been broken, completely changing the A4’s profile. According to Audi, this has been done to more closely align the A4 with its Audi siblings and to emphasise the wheelarches more prominently – a trademark of Audi’s current design chief Marc Lichte. The lighting, front and rear, has also been redesigned with a further emphasis on vertical LED segments as found on the A6 and A7. 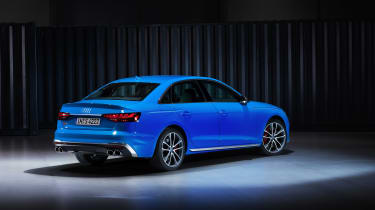 Inside, the A4 has undergone a more subtle update, with only the electronic interfaces having changed from those of the current model. Rather than switch to the new dual-screen layout found in its larger siblings, the A4 has instead just replaced the previous MMI system with the new touchscreen on a slightly larger 10.1-inch display, with new software borrowed from the Q3 and A1. This has meant the removal of the previous model’s click-wheel by the transmission selector, which has been replaced by a small cubby. The A4’s virtual cockpit has also been given a refresh, with new software to match the central MMI system, and remains a clear and functional take on digital dials.

The A4 range will initially launch with six engine variants, with two more to follow soon after. Despite the downward trajectory of diesel, five diesel variants are available made up from four four-cylinders and two V6s. These vary between 134 and 342bhp, the latter powering the new S4 TDI. Three petrol versions are also available – all 2-litre turbocharged fours with 148, 187 and 242bhp. The lower-powered diesels and all petrol models also feature mild-hybrid assistance based on a new 12V system, rather than on the more expensive 48V system usually associated with mild-hybrids. Four-cylinder A4 variants come as standard with a seven-speed S-tronic dual-clutch transmission, while the V6 diesel models, including the S4 TDI, use an eight-speed ZF torque-converter automatic due to their higher torque loads. A manual transmission will be available for 148bhp TDI and 187bhp TFSI models soon after launch. Quattro all-wheel drive is available in selected engine variants, and standard on the S4.

As mentioned above, the S4 features the top-specification 342bhp V6 diesel, which does feature the chunkier 48V mild-hybrid system, sharing the basic powertrain package with the larger SQ5, S6 and S7. Peak torque is a substantial 516lb ft, and helps the new S4 reach 62mph in 4.8sec, only 0.1sec behind the previous V6 TFSI, whilst CO2 and MPG figures are improved. The mild-hybrid system not only acts as a starter motor and generator, but also powers an electric compressor to improve response from the large, single turbocharger.

High-riding Allroad models have also been through the same series of updates, with a greater emphasis on differentiating them from standard Avant models. Standard A4s will be available in the same combination of S line and SE body trims as before. Due for a European launch this autumn, prices and final UK specifications for the new cars have yet to be confirmed, but will likely mirror those of the current model, trading blows with the BMW and Mercedes.