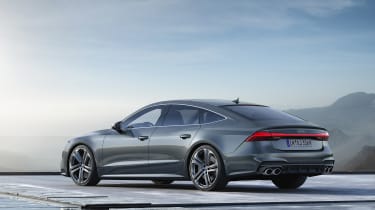 Audi has released details of the new S6 and S7, which will be available in the UK in the coming months with identical V6 diesel powertrains featuring mild-hybrid assistance. If this sounds disappointing for models that used to exclusively feature a V8, and in the S6’s case even a naturally aspirated V10 in times past, it’s likely that the new V6 TDi models will appeal instead to a much wider audience.

The V6 diesel powertrain is the same as that recently revealed in the updated SQ5, and combines a single-turbo 3-litre V6 diesel engine with an electric compressor driven from a 48V electrical system. Power is rated at 344bhp, with a 516lb ft plateau of torque available between 2500 and 3100rpm. The electronic power generator, or electric supercharger by another name, draws from the 48V electrical system to pump compressed air into the turbocharger at low rpm, building boost before the engine’s exhaust gases eventually arrive to take over. It’s fed from an integrated crank-mounted starter motor and generator, which then stores electrical energy in a small battery pack mounted towards the rear. This is a similar system as debuted on the larger SQ7 SUV, and will soon be fitted to the incoming SQ8.

> Click here for our more on the incoming Audi RS6

Parallels must be drawn, of course, to previous generations of Audi S6 and S7, whose twin-turbocharged 4-litre petrol V8 engines produced more power, at 414bhp (+70bhp), but significantly less torque at 405lb ft (-111lb ft). The main benefit of the move to diesel is a significant reduction in fuel use, with all the new models poised to reach an MPG figure of up to 40mpg, as opposed to the mid-20s achieved in the previous petrol models. Despite the power deficite, the new S6 saloon will reach 62mph in 5sec flat (the heavier S6 Avant and S7 taking a further 0.1 of a second), which is only 0.4 of a sec slower than the previous model.

The engine is connected to an eight-speed Tiptronic automatic transmission, with power running through the usual quattro all-wheel-drive system on a 40:60 front-to-rear standard torque split. Power is able to be shuffled forward and back depending on the driving conditions. A Sports Differential is also on the options list, which will actively distribute torque laterally between the rear wheels for a more lively handling balance.

The engines aren’t the only changes as the new S6 and S7 will also feature Audi’s latest chassis technology, including a new rear-wheel-steering system borrowed from the SQ7 which turns the rear wheels up to five degrees in the opposite direction at speeds below 37mph, and then in the same direction by two degrees above 37mph. Audi’s S sport suspension set-up is also standard, with a lower ride height in comparison to standard S line models (20mm for the S6, 10mm for the S7). To further refine ride quality, Audi also offers an adaptive air-suspension system as an option. Also optional are carbon-ceramic brakes, which build on the already updated brake package on standard models. 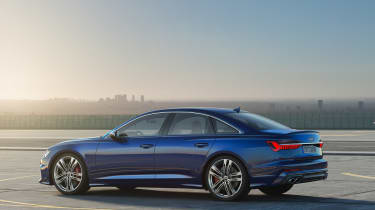 As usual, Audi’s S-model styling treatments are on the subtle side, with only small colour and trim changes over standard S line models, although the signature quad round exhaust outlets are present and correct. New 20-inch alloys will be standard in the UK, with 21s on the options list. In the US, S6 and S7 models will feature the same 2.9-litre twin-turbocharged V6 engine as found in the smaller RS4 (and Porsche Panamera S), with an identical 444bhp power figure. Audi has no plans to bring that model to the UK, with those after the ultimate in performance having to wait for the incoming RS6 and RS7.

Final UK pricing and specifications have not yet been released, but judging by the German prices, we’d suggest a starting price around £65k for the S6 saloon, with the Avant an extra thousand or so on top. The S7 will likely start closer to £70k.