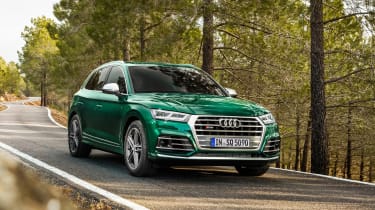 Audi has released details on the new SQ5, which after a year-long hiatus will return with a new diesel engine under the bonnet. When the current model was revealed in 2015, Audi changed the original SQ5’s recipe by only offering it with a 3-litre turbocharged V6 petrol engine (which is also seen in the S4 and S5), but has returned to diesel after a WLTP-enforced shake-up.

The diesel itself is a new mild-hybrid 3-litre V6, which employs an electronically powered compressor in addition to the single turbocharger, primed specifically to improve response at low rpm. By spinning up almost instantly, it assists the traditional turbochargers at engine speeds of up to 1650rpm, after which the traditional gas-driven turbo takes over, unleashing the engine’s full capability. And capable it is, with power rated at 342bhp, but it’s the headline torque figure plateauing at 516lb ft between 2500 and 3100rpm, which is of most interest. This grunt is sent to a ubiquitous eight-speed ZF transmission and quattro all-wheel-drive system, and will get the SQ5 to 62mph in just 5.1sec.

> Click here for our review of the Audi SQ5 TFSi

Powering the electric compressor is a 48V electrical system, which is fed from a lithium-ion battery pack under the boot floor. This system also incorporates a crank-mounted generator and starter, which is able to recuperate up to 12kW of energy to then feed back to the battery. This also reduces fuel use by facilitating an extended start-stop system and engine-off coasting under light throttle loads. This is an identical system to the one used in the SQ7, albeit with two cylinders less.

Also available as an option is an Audi Sport Differential on the rear axle, actively distributing torque between the wheels, while standard in the UK will be adaptive dampers within a ‘sport suspension’ set-up, which means the SQ5 sits 30mm lower than the standard Q5 – an air-suspension set-up is also available on the options list. All of these components are individually controllable within the Driver Select modes.

Visually, little has changed on the SQ5 both inside and out, sharing the same suite of standard equipment as the previous model. As such, 20-inch alloys, red brake calipers and SQ5 badging are all key features. Available from the Summer, the new SQ5 promises to be a more practical proposition as a diesel model compared to its petrol predecessor. Expect to see them sprinkled liberally around private school pick-up zones.