New petrol SQ5 may be music to the ears of some, but still can't entertain like some rivals 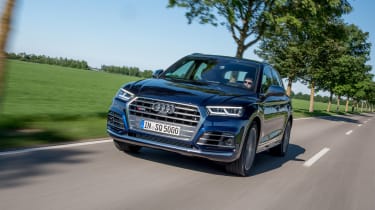 The original Audi SQ5 was the brand's first diesel-powered S model. Diesel, if you'd not noticed, has been given a rather lower profile at the Volkswagen Group in recent years, so while another diesel SQ5 is on the way the car has been launched with a new 3-litre V6 petrol engine.

To this we add the recently-renewed Q5's handsomely square-edged styling and Audi's equally renewed focus at making more entertaining drivers' cars - the refreshed RS3 and S5 Sportback have both recently impressed us - so there's potential here for a genuine Porsche Macan or Mercedes-GLC-beater.

If you're not up to spotting the visual differences between the new SQ5 and the car it replaces then you'll have less trouble discerning what powers it. Out (for now) is the diesel, in comes an aluminium-block petrol V6 with a pair of camshafts per bank, direct injection and an intercooled turbocharger.

Power is sent through an eight-speed Tiptronic automatic (a conventional auto, rather than a dual-clutch) to all four wheels, with a locking centre differential to meter out the power. That power figure is healthy enough, with 349bhp between 5400-6400rpm, with 369lb ft of torque delivered in an unwavering line from 1370-4500rpm. 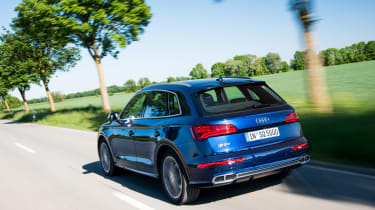 Those numbers are similar, albeit lower than those delivered by the SQ5's closest rival, the Mercedes-AMG GLC 43. As such, it's a little slower off the mark, reaching 62mph in 5.4sec (GLC: 4.9), while top speed is limited to 155mph. More tellingly, the petrol SQ5 isn't as quick as its diesel predecessor either, which crossed the 62mph mark in 5.1sec. A brief jaunt on the autobahnen around Munich suggests it'd quite happily sail beyond that limited top speed figure if unleashed, but the V6's undramatic power delivery also makes the slightly sub-Mercedes acceleration numbers believable too.

While not something you can really appreciate in the SQ5, the 3-litre TFSI unit that powers it is among the first Audi units designed specifically with hybridisation in mind. It also operates on a development of the Miller combustion cycle for increased efficiency, with turbocharging to pressurise air into the cylinders during a shorter intake valve opening period. An Audi-developed valve lift system counters with greater power and later intake valve closing at higher revs.

Deceptively quick. The V6 may not feel dramatic but it's certainly effective, responding strongly from low revs even in higher gears, and charging with undiminished urge to the red line. It's aided in this process by the slick-shifting 8-speed auto, which is undemanding in most drive modes and intuitive enough when left in Dynamic that you rarely feel the need to use the paddles - though it's most effective if you do. 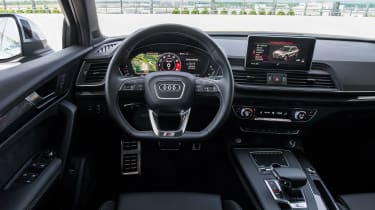 The trouble with deceptive speed is that it's not a great deal of fun. But for the scenery passing by your windows a little quicker, there's little sensation of gathering pace; the aforementioned GLC 43 does a better job of kicking you in the kidneys and rewards you with a better engine note than the fairly muted Audi. Some will appreciate the refinement - the V6 is creamily smooth from idle to the red zone and the cabin is a haven undisturbed by wind or road noise - but a little more aural accompaniment wouldn't go amiss to remind you that you haven't accidentally bought a cooking model.

Just as the engine is held back by its lack of drama, what feels like a fundamentally talented chassis is held back by that usual Audi bugbear of dynamic steering. Put simply, there's very little feedback and a disconcerting lack of resistance around the straight-ahead. This makes smaller inputs, particularly at higher speeds, feel nervous, since there appears to be little keeping you pointing in a straight line. Winding on more lock helps and the rack is always precise, but the over-light steering detracts from enjoying anything the chassis might offer. A subsequent drive in the distinctly unsporty, natural gas-powered A5 G-Tron (not coming to the UK) with its regular setup revealed how much more appealing a standard system would be.

There's still plenty to appreciate in the SQ5's chassis however, including a surprising degree of balance across both axles (like other recent Audis, the SQ5 seems to be moving away from the old tropes of nose-heaviness), strong levels of grip, and a pliant ride quality (with the usual caveat that we're yet to test the car on rougher UK tarmac). Those, along with the easy pace of the new 3.0 TFSI, make getting from A to B a rapid and efficient process, just not a journey you're likely to remember at the end of it.

The new SQ5 comes in at £51,200, which is a couple of grand more than the GLC 43 and about £3000 more than the real car to beat in this segment, at least in handling terms, the Porsche Macan S. The SQ5's performance is on-par with the Macan's (unsurprising, since they're similar under the skin), but the Porsche feels the most overtly dynamic of all the cars in this segment and offers much more engaging steering, one thing that rules out many SUVs as drivers' cars. 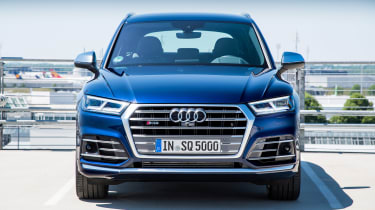 Rueing the loss of the SQ5's old diesel engine? Don't fret - while no release date has been quoted, one is on the way. Diesels may not be the first choice for many performance cars but they make a great deal of sense in cars like these, and combined with the reduced fuel costs, it may also better suit the SQ5's character. 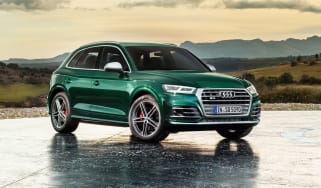 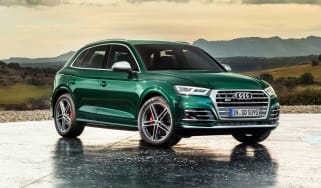 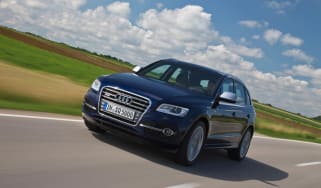 The new SQ5 is an S-tuned version of the Q5 SUV, and it's the first of Audi's S-cars to feature a diesel engine
Order books open for new 349bhp Audi SQ5 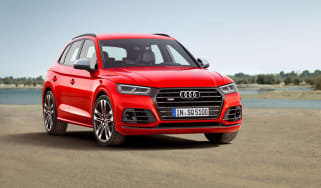 The new hot SUV is available to order now, with prices starting from £51,200
Audi SQ5 Plus – more power, more torque and more kit 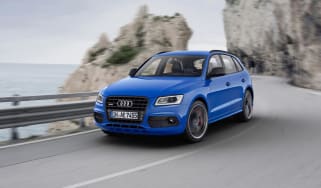 The Audi Q5 crossover gets a new range-topper, with extra urge and a sports rear differential
Skip to HeaderSkip to Content