The new hot SUV is available to order now, with prices starting from £51,200 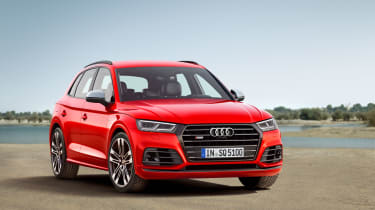 Moments after revealing its latest SUV concept, the Q8, at this years Detroit auto show, Audi announced a new version of the SQ5. The new model is now available to order from Audi, with prices sitting just above those of the Porsche Macan S.

The new SQ5 is only available with one engine, the same turbocharged 3-litre V6 found in the latest Audi S5. The single twin-scroll turbocharger is located within the banks of cylinders to create a more compact, hot-V engine.

Audi’s latest petrol V6 produces 349bhp and 369lb ft of torque but, despite sharing the same engine, the SUV still isn’t a fast as its coupe cousin. That’s mostly thanks to weighing 1995kg, and although that’s 35kg less than the old diesel SQ5, it's 380kg more than the S5. As a result the SQ5 will accelerate from 0-62mph in 5.4sec, 0.7sec slower than the S5. However the top speed of both cars is the same, each limited to 155mph.

> Click here to read our review of the Audi S5

As with the engine there’s only one transmission, an eight-speed automatic gearbox. Drive is sent to all four wheels via a centre differential, which helps distribute torque to whichever axle has the most traction. The SQ5 can also be specified with Audi’s sport rear differential, which sends torque across the rear axle to help improve the car’s agility. Even without the optional sport differential the car will still brake the inside wheels when cornering. 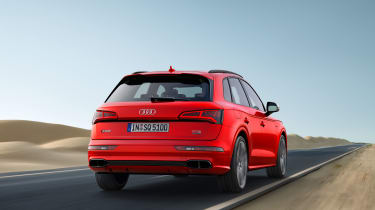 Audi claims the new SQ5 will be able to deliver up to 34mpg on the combined cycle, with a CO2 output of 189g/km. That's helped by the weight loss over the previous model, plus long upper gear ratios on the transmission.

The SQ5 comes standard with adaptive dampers that continuously adjust depending on the driver’s style and road conditions. The dampers are also linked to the drive select system and help change the attitude of the car. The dampers, steering, engine gearbox and differential (if the optional sport differential is fitted) change their characteristics to make the car feel sportier or more comfortable, depending on which setting is selected. The SQ5 can be fitted with air suspension too, allowing the ride height to change depending on the selected setting.

The SQ5 comes with a choice of five optional 21-inch wheel design, but a set of slightly smaller – though still very large – 20-inch items come as standard. These huge wheels are needed to clear space for the 350mm front brake discs and six-piston calipers.

Inside, the SQ5 is well equipped, coming as standard with Audi's MMI Navigation Plus and electric Nappa leather seats, though the options list contains some gems like Audi's virtual cockpit, the centrally mounted 'phone box', and Matrix LED headlights.

New front and rear bumpers, and matt grey trim helps to elevate the SQ5 above the other Q5 models. Silver door mirror caps then highlight it as a more premium Audi, while body coloured door trims and twin exhausts emphasise its sporty nature.

The new Audi SQ5 is available to order now with prices starting from £51,200. First deliveries to UK customers are expected in June.