The Audi Q5 crossover gets a new range-topper, with extra urge and a sports rear differential 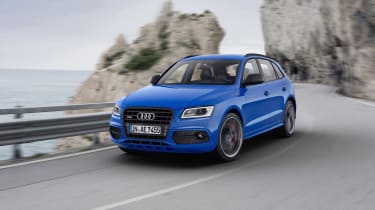 In the spirit of constant development, Audi has made a series of improvements to the range-topping SQ5, with a new model dubbed SQ5 Plus.

The diesel-powered model now gets greater power and torque, for extra performance, while small changes to the equipment roster keep the styling fresh.

At the SQ5’s heart remains a three-litre, twin-turbocharged turbodiesel powerplant. In Plus form Audi has raised injection pressure, which raises power to 335bhp – 27bhp greater than before.

Audi’s car is still the quicker of the pair, by two tenths over the 0-62mph sprint, at 5.1sec. That’s also the same as the non-Plus Audi SQ5, while top speed remains electronically limited to 155mph.

Quattro permanent all-wheel drive is standard, but Audi has augmented the Plus’s specification with a sports differential on the rear axle, to apportion power between the rear wheels. 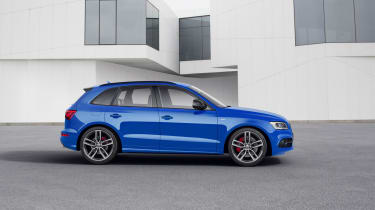 Visual changes are subtle, though gloss black 21-inch, 5-twin-spoke alloy wheels separate the SQ5 Plus from its lesser-performing stablemates. Gloss black also features on the exterior mirror housings, door handles, roof edge spoiler and rear diffuser. Another blink-and-you’ll-miss-it detail can be found at exhaust level, where each of the twin pipes is now joined by a central clasp.

The interior is bedecked in diamond-stitched Nappa leather and front seat passengers get sports seats. Practicality is maintained by way of a sliding rear bench, that can be adjusted to boost either passenger legroom or luggage space.

The existing Audi SQ5 will continue alongside the Plus model, which goes on sale later this year. Pricing has not yet been confirmed.