Audi’s next RS6 Avant has been spotted with a production body, and a different face… 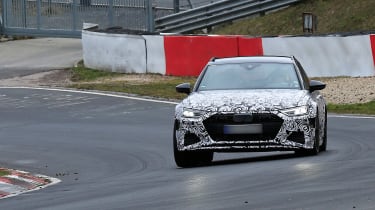 Audi’s eagerly awaited C8 RS6 Avant has been spied lapping the Nürburgring with a new, production-specification body. We’ve already seen spy shots of the new car with recognisable styling before, but it looks like something is a little different this time around, with a new front bumper spotted incorporating the sleeker headlights found on the A7, breaking the usual design convention.

Look closely and you'll note the front bumper cleanly integrates with both the bonnet and wings, meaning this aggressive new front end could well find itself on the production model we’ll see later this year. This is also a technique that BMW uses on its M3/M4 twins in fitting the sleeker nose from the M4 onto the M3 saloon for greater distinction between it and standard models.

> Click here for our look at the upcoming Audi RS7

Peer beneath the camouflage along the flanks and it’s clear the RS6 will borrow the same widened arches as its predecessor, building on the box arch-like wheelarches already found on the standard A6 Avant. Those massive arches are filled with a new alloy wheel design, likely to be up to 21 inches in diameter. Peer behind these, and you can also spot the tell-tale silver/grey carbon-ceramic brakes, all adding up to quite a substantial technical arsenal. 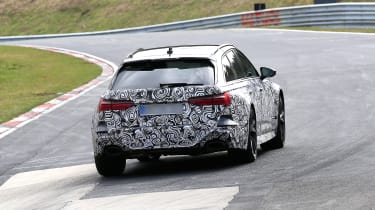 The next RS6 is also to share its drivetrains with the upcoming Audi RS7, pushing the fast estate into new territory by offering an electrified variant, in addition to the standard petrol-only RS6. As a result, we’re expecting the new RS6 to be packing a twin-turbocharged 4-litre V8 engine with around 600bhp in standard trim, with the electrified e-tron version likely reaching near-700bhp.

News of the Cayenne Turbo S E-hybrid’s introduction later this year is further evidence of the Volkswagen Group’s flagship plug-in V8 powertrain extending beyond its current MSB applications, and into the more widespread MLB-evo platform, on which both the A6 Avant and Porsche Cayenne sit. This should give the new RS6 Avant a distinct edge against rivals like the Mercedes-AMG E63 S Estate.

Otherwise the RS6 Avant will do what it does best, in offering a sophisticated, well built and spacious cabin, with all the latest in-car tech and safety equipment introduced on the standard A6, only with a fire-breathing atom bomb of an engine underneath.

We suspect the RS6 to appear some time later this year, joining the RS7 as Audi’s flagship RS models, with new S6 and S7 models to also appear sometime beforehand. The AMG E63 will need to be on notice.