New flagship Cayenne to be VW Group’s most powerful SUV, outpunching even the Lamborghini Urus 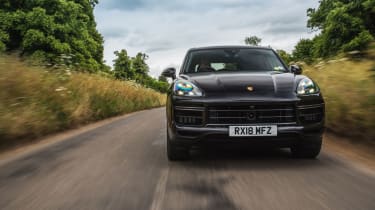 The Porsche Cayenne range is soon to gain a Turbo S E-hybrid model, featuring the same hybridised twin-turbo V8 engine as the similarly named flagship Panamera. As confirmed to evo by Porsche CEO Oliver Blume, the new model will top the Cayenne range – and indeed the entire VW Group’s SUV offerings – in regards to power. Although a specific figure has not yet been confirmed, the aforementioned Panamera’s 671bhp total output gives a strong clue as to what we can expect.

We may have expected a higher-output version of the current Cayenne Turbo to arrive at some point, but the introduction of this model is confirmation that the hybrid V8 arrangement can work within the more confined MLB-Evo platform used by the Cayenne, and so isn’t just restricted to the MSB platform that was co-developed with Bentley and is utilised by the Panamera. This news also lines up with Audi’s confirmation that its incoming RS7 – a model that uses a similar MLB platform to the Porsche SUV – will also pick up a version of the same powertrain. The recently revealed Cayenne Coupe will be available in Turbo S E-hybrid form too.

> Click here for more info on the new Cayenne Coupe

However, although the new Cayenne variant will usurp the Lamborghini Urus, which develops 641bhp from a twin-turbocharged V8 without any hybrid gubbins, it’s unlikely the Porsche will pip the 697bhp Jeep Grand Cherokee Trackhawk as the world’s most powerful SUV – Stuttgart’s engineers will be wanting to take a more nuanced approach with its most powerful SUV to date.

Specific timing of the Cayenne Turbo S E-hybrid’s release is still unconfirmed, but with Porsche attending this year’s New York, Frankfurt and LA motor shows, we’d suspect the new flagship Cayenne to appear before the end of 2019.