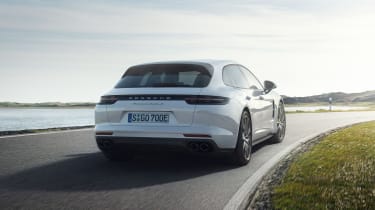 Porsche has taken its 671bhp Turbo S E-Hybrid drivetrain and added it to its Panamera estate, the Sport Turismo, to create not only an impressively fast car but an exceptionally practical one too.

The Turbo S E-Hybrid’s drivetrain is partly made up by the twin-turbo hot-V 4-litre V8 engine that’s found in the regular Turbo model. The internal combustion engine produces a more than healthy 542bhp, yet it’s still aided by a 134bhp electric motor. The way hybrid powertrains work means those figures can’t simply be added to get a total output, but the Panamera’s total of 671bhp isn’t far from the sum of those figures.

> Read our review of the Porsche Panamera Turbo S E-Hybrid

As you’d expect, with the help of an electric motor and turbochargers, the Turbo S E-Hybrid has a massive amount of torque; the two motors endow it with 627lb ft. With a boost strategy taken from the 918 Spyder – even though that was a naturally aspirated, lightweight hypercar – the S E-Hybrid generates its peak torque at 1400rpm. 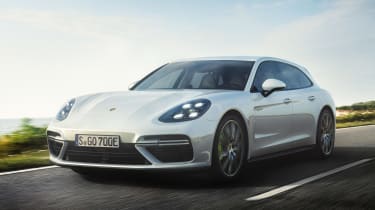 Like the regular Turbo, and every Panamera other than the very base model, the Turbo S E-Hybrid has Porsche’s four-wheel drive system that varies the torque going to each axle. The rear axle is also fitted with a torque vectoring, electronically controlled limited-slip differential. Despite the addition of an extra motor, the S E-Hybrid still uses the eight-speed PDK transmission that Porsche specially developed for the Panamera.

The clever drivetrain and huge power helps the performance estate accelerate from 0 to 62mph in a mightily impressive 3.4sec, the exact same time as the regular Panamera Turbo S E-Hybrid. 200kph, or 124mph, can be reached in 8.5sec and it will go on to a top speed of 192mph.

As well as some exceptional performance figures, the hybrid drivetrain means the Panamera can adopt a very efficient sort of character too. Not only can it achieve an official combined fuel economy of 97.4mpg, it can also travel up to 31 miles on pure electric power alone. Rather than being limited to a pedestrian-like speed when running on just the electric motor, the S E-Hybrid can reach 87mph. 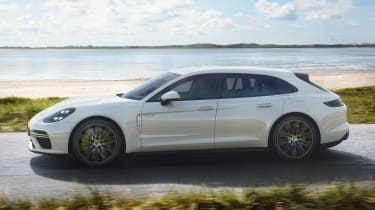 Being the flagship model, the Sport Turismo S E-Hybrid comes loaded with kit. As well as three-chamber air suspension there’s carbon ceramic brakes, adaptive cruise control and a retractable rear spoiler. The adaptive aero device stays stowed away at minus seven degrees, following the roofline, up to a speed of 105mph. Above that it raises to an angle of one degree to increase pressure over the rear axle and help stability.

> Learn everything you need to know about the new Porsche Cayenne