The already controversial Cayenne now has a coupe variant 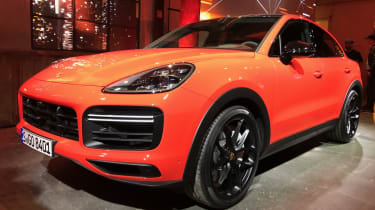 Porsche has revealed its latest new model, a much-ruminated coupe version of the Cayenne SUV. Called the Cayenne Coupe, the new car shares its underpinnings and powertrains with the standard Cayenne, but instead places them in an aggressively styled new package that will rival cars such as the BMW X6 and Mercedes GLE Coupe.

All of the Coupe’s exterior panels from the A-pillar back are bespoke, with a 20mm-lower roof, a shallower windscreen and an 18mm-wider rear. The roof design is actually rather clever, as its coloured roofline drops away faster than the roof itself, the dark contrasting colour and material of the latter disguising the true height of the car. The discrepancy in height is then covered by a roof spoiler, again finished in black, giving the Cayenne Coupe a very sleek, almost 911-like silhouette without too much of a compromise in the cabin.

Like many other Porsche models, the Cayenne Coupe has an integrated active aero system that pairs a static high-mounted spoiler with a second, actively extending one situated underneath the rear glass. At speeds of over 56mph, this spoiler extends a further 135mm into the airstream, increasing downforce and stability with no discernable increase in drag. 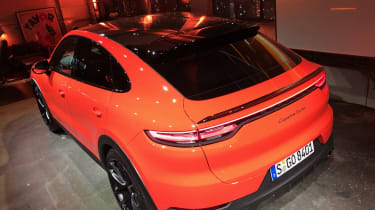 The roof itself is of fixed glass as standard, but can be optioned in carbonfibre as part of a lightweight sports option package that also includes a new 22-inch wheel design, a Sport Design styling kit, and Porsche’s classic houndstooth fabric inside. To further offset the lowered roofline, Porsche has dropped the rear seats by 30mm. The interior itself is unchanged from the Cayenne save for those rear seats, which are now heavily sculpted, although a flatter bench-style rear seat can be fitted at no extra cost.

The Coupe is due to pick up the full range of Cayenne powertrains in the future, including an integration of the Panamera Turbo S E-Hybrid's 681bhp hybridised twin-turbo V8 which will follow it's integration into the standard Cayenne later this year.

Although this coupe bodyshell is more 'sporty' than the standard Cayenne, according to engineers on the project the Coupe will feel much the same to drive on the road, with no discernable difference in road holding or stability, despite the extra 18mm of rear track width. The Coupe doesn't weight any less than a standard Cayenne either, as it's marginally smaller body has required the need of extra body bracing, thanks to that glass roof. Finally, that carbonfibre roof option is said to reduce around 20kg from the total package, but at over 2.1 ton, will not likely be felt on the road. 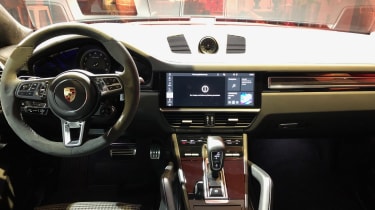 All engines send their power to all four wheels via the usual eight-speed torque converter automatic, while all of Porsche’s chassis control technology, such as active anti-roll and rear-wheel steering, can be found on the options list.

The Cayenne Coupe is available to order now from £62,129, with the Turbo at £104,729 – increases of £6164 and £5438 respectively over their standard Cayenne equivalents – and will reach customers at the end of May this year.