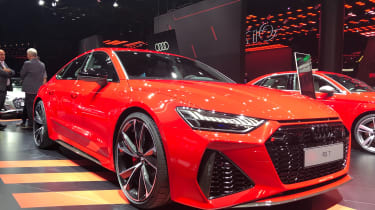 Three weeks since the covers came off the new RS6 Avant, Audi Sport has revealed the new Audi RS7 Sportback at the Frankfurt Motor Show. Powered by the same 4.0-litre twin-turbo V8 and also utilising the 48-volt mild-hybrid system of the wagon, the new RS7 Sportback also shares much more with its RS6 Avant brother.

Like the RS6, this second generation RS7 Sportback has a body that’s 40mm wider at the front, a first for this particular RS model. It also features a lower and wider single frame front grille that includes a pair of wider air intakes and, above, the now mandatory ur-quattro inspired trio of slots beneath the leading edge of the bonnet. Even the holes in the honeycomb grille are functional, feeding the vast radiators behind with much needed cooling air.

That cooling air is required for the powertrain that’s becoming the defacto option for the big hitting front-engined Audi Sport models. 592bhp and 590lb ft are the headline numbers, with a sub-four second 0-62mph time (3.6 seconds) and, as per the RS6, three different maximum speeds depending on which optional pack you select: 155mph as standard, 177mph for the Dynamic pack and 190mph if you go Dynamic Plus. 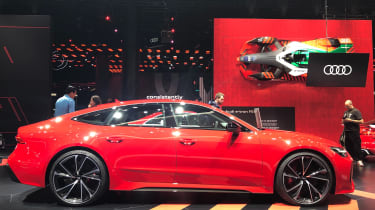 As with the RS6 there’s also a 48-volt mild-hybrid system connected to the V8. This either allows the belt-driven alternator starter to either recover up to 12kW of electrical energy under gentle acceleration to charge a lithium-ion battery or it allows the car to coast between 34 and 99mph with the engine off.

An eight-speed tiptronic gearbox is the only transmission offered along with quattro four-wheel drive, with a 40:60 torque split via a mechanical centre diff. As much as 75 and 80 per cent can be directed to the front or rear axle respectively, while a rear diff is also available as an option if you go for either the Dynamic or Dynamic Plus packages.

The RS7 Sportback’s standard air-suspension can be switched for the optional RS Suspension and Dynamic Ride Control that includes a new generation of dampers. Six driving modes are also selectable via Audi Drive Select: comfort, auto, dynamic, efficiency and two customisable RS-specific modes: RS1 and RS2, the RS settings allowing you to switch the stability control to sport mode. Both RS modes can be activated via a RS MODE button on the steering wheel. 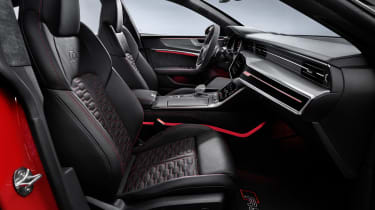 Continuing the link to the RS6, the RS7 Sportback is fitted as standard with cast-iron brakes (420mm discs at the front, 370mm for the rear), with 440mm carbon-ceramics available as an option. A 21-inch wheel design is standard fit, the 22-inch items are an option.

Available with either a four or five seat interior configurations the RS7 Sportback arrives in the UK in the first quarter of 2020 and will form part of an Audi Sport model offensive that will see a further four new RS models arrive: RSQ3, RSQ3 Sportback, RSQ8 and RS4 Avant. These will join the existing TT RS coupe and roadster, RS3 Sportback and saloon, RS5 coupe and Sportback line-up, along with the recently announced RS6 and, of course this new RS7 Sportback.