Smart looking and well-finished Audi A1 is quick and capable, but ultimately leaves you cold 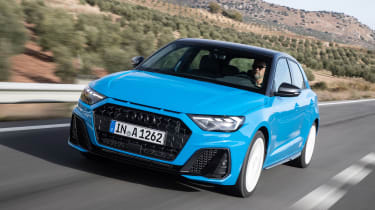 This new Audi A1 shares much of its architecture with the latest version of Volkswagen’s Polo and is built on the same simplified MQB A0 platform that also underpins SEAT’s Ibiza and various VW Group crossover spin-offs. It also gets the same range of petrol engines (they’ll be no diesels offered), including the Polo GTI’s 197bhp turbocharged 2.0-litre, as tested here.

Longer than before, the new A1 is fractionally lower and slimmer than the car it replaces, which designers claim makes it look sleeker and more aggressive. In the metal the A1 it looks like a more tautly penned version of the old car, it even features a trio of vents on the leading edge of the bonnet in a nod to the Ur-quattro, a design detail you’ll start to see more of in other forthcoming Audi models.

> Click here for our review of the recently updated Audi R8

It’s inside that much of the progress has been made though, the new A1 feeling much like a scaled down version of the firm’s bigger saloons. As you’d expect there’s plenty of brushed aluminium and the latest touchscreen infotainment screen and TFT instruments bring the car bang up to date. There are some neat flourishes too, such as the colour coded trim inserts and the pin-stripe LED lights that pick out the instrument binnacle – although the faux full width air vent in front of the passenger looks a bit crass. 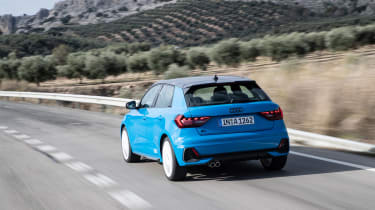 Audi’s new A1 features a fairly simple supermini suspension layout of struts at the front and a torsion beam at the rear. Crucially, it also means that there’s currently no option to add four-wheel drive. So no new S1, for now at least. Still, adaptive dampers are now available for the first time, although the two stage units are only fitted to the top 2.0-litre version. All S line modes (there’s also SE and Sport) get stiffer Sport suspension, which can be deleted in favour of the SE set-up if you fancy more comfort.

Needless to say, you can alter the steering, throttle and gearshift (auto, dynamic, efficient and individual), but like most systems the sweetest combination is the sportiest engine response with comfort for everything else.

Most of Audi’s engineering attention has been focused on connectivity, which means infotainment and driver assistance. For the former there’s an 8.8-inch touchscreen that controls everything from nav to phone, while the driver gets the option of 10.25-inch Virtual Cockpit TFT dials. 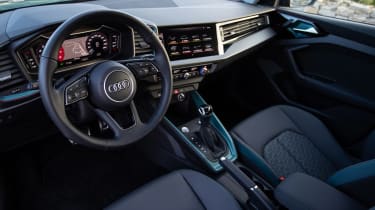 Unlike the previous A1 there will be no three-door version this time, just the five-door Sportback. Just one in five examples of the old car were three-door, so it’s no surprise Audi has ditched the concept.

Under the A1 S line Competition’s bonnet is the 197bhp EA888 turbocharged 2.0-litre that also powers the Polo GTI. Badged the 40 TFSI, it’s front wheel drive and only available with the six-speed S tronic twin-clutch transmission.

Running the Miller cycle, the engine creates a valve opening overlap for a cleaner and more efficient burn, and like all the A1’s engines it gets a particulate filter in the exhaust.

It’s a brisk performer on paper, reaching 62mph in a claimed 6.5 seconds, before rattling on to 147mph, and there’s an artificially augmented growl from the engine if that’s your kind of thing. Peak torque of 236lb ft is delivered in a plateau-like line from 1500rpm. 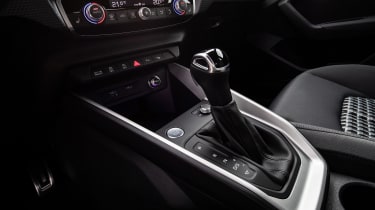 If you’re craving the sort of scintillating driving experience that nearly 200bhp in a supermini suggests, then you’ll need to look elsewhere. It’s a capable and agile little thing the A1, but it lacks sparkle.

The performance number promise much on paper but the engine’s turbocharged torque and the auto gearbox’s willingness to execute full-bore upshifts don’t relate to a thrilling turn of speed. It’s quick from point-to-point, but you’ll struggle to remember the journey when you get there.

Whatever the driving mode you choose, the A1 drives very much like a 21st Century VW product, so it’s fast and unflappable yet demands very little of its driver. The steering is quick and accurate, the front tyres can be made to work for their living and the dampers in their firmest setting offer strong body control. The brakes are good, too, delivering powerful and progressive stopping power.

Better still, the blend of relatively modest mass and shortish wheelbase provides the A1 with genuine poise, the chassis reacting with a confidence inspiring consistency and predictability. 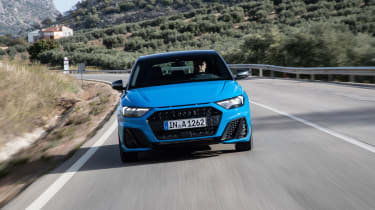 Unfortunately there’s precious little feedback through the electrically assisted steering, while you can feel the torque vectoring working the front brakes to keep the nose locked on line as you push on through slower corners. There’s some torque steer too, with even moderately crowned roads causing the wheel to writhe and tighten in your hands.

For the rest of the time, the A1 is a refined, comfortable way to get about. Wind noise is low, the driving position is excellent and, when it’s not in its sportiest mode, the engine is impressively muted. That said the ride isn’t perfect, especially on our test car’s 18-inch wheels. The optional adaptive dampers help provide a supple primary ride, especially on smoothly surfaced roads, but throw in some broken tarmac and the big-wheeled A1 can shudder and crash as the suspension struggles to contain the wheels.

Audi has yet to reveal local the pricing for the A1. However, with the outgoing S1 knocking of the door of £28,000 in its most basic guise, you can expect this new 40TFSI S line Competition to start from at least £26,000. There’s no hiding from the fact that’s a considerable amount of money for a supermini.

At the other end of the scale in terms of premium factor is Ford’s new Fiesta ST. Its 1.5-litre three-cylinder engine produces 197bhp and costs £21,145 in ST 2 guise and £22,895 as a lavishly equipped ST 3. These are prices for the five-door – you can pay less if you only need three doors.