Audi's four-wheel drive version of the A1 combines 250bhp with a £40K pricetag. A stretch too far for Audi's elastic brand? 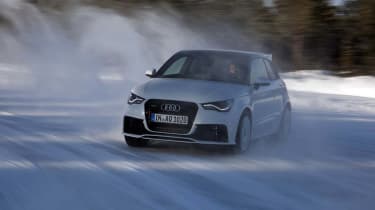 Audi's take on the ultimate hot hatch. Until now buyers of Ingolstadt's Mini rival haven't been able to specify more than the 180bhp that the top-spec 1.4-litre TFSI delivers - but the A1 Quattro, which is going into ultra-limited production with just 333 car sset ot be built, has the 256bhp 2-litre TFSI engine from the S3, together with a reworked version of its four-wheel drive system.

Audi's engineers are nothing if not ambitious. Basically the A1 Quattro uses the same powertrain as the existing - and far bigger - S3, meaning a tweaked version of the familiar VW Group 2-litre TFSI engine and four-wheel drive via a rear clutch that takes drive backwards when it's required. In engineering terms it's a packaging miracle - the A1 was never intended to take this engine or a four-wheel drive system - with some fairly substantial modifications to the rear of the floorpan to mount the S3's four-link rear axle. The driveshaft to the rear diff runs through what used to be the spare wheel well and the petrol tank - Audi had to develop an all-new 'saddle' fuel tank to bridge it.

Promising, although as our early assessment took place on a frozen lake in Sweden, we'll have to wait to deliver the definitive verdict. Even on studded snow tyres, the A1 Quattro felt to be as quick as the official figures suggest - Audi claims a 5.7 second 0-62mph time - with full throttle producing a serious induction roar. Only a manual gearbox will be offered - apparently DSG wouldn't fit - and the transmission uses the same shift knob as the R8, and has a pleasing weight to it that's missing from the standard A1.

Grip levels were surprisingly decent on snow-covered ice, although steering feel was still noticeable by its absence (we'll wait until we get one on tarmac to report on that) - and the A1 has been set up with a pleasingly neutral handling balance, torque being shunted to the rear axle when understeer is detected, with a version of Audi's torque vectoring system also helping out. Up to 100 percent of torque can go to the rear wheels, and with the stability control system fully disengaged the A1 Quattro is an amusingly sideways companion.

It doesn't. Audi is set to have this bit of the market to itself, with the 19 versions of the A1 Quattro that will find their way to the UK wearing a £39,930 pricetag, despite being left-hand drive only.

The only other performance hatch that gets close to that are the loonier tuned versions of the Abarth 500/ 695.

There are no options. All cars are finished in Glacier white, have manual transmission, full-spec satnav and the BOSE speaker upgrade and leather bucket seats.