The new five-door 'Sportback' version of the Audi A1 is driven in the UK for the first time, tested with the most popular 121bhp TFSI engine 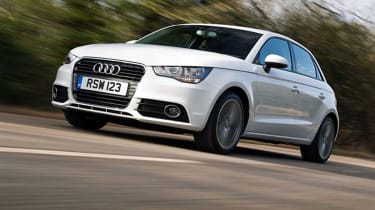 The Sportback 1.4 TFSI Sport is the new, and entirely predictable, five-door version of the Audi A1, being driven here in the UK for the first time. Better access to the rear seats will cost £560 more than the equivalent three-door version, and Audi promises that the driving experience otherwise stays the same. On previous experience, that could be a mixed blessing…

Despite the extra doors, the A1 itself has only grown by 6mm in terms of overall length. And, as it wasn’t exactly huge to start with, that means some very dinky little doors. The new front door is so short that taller drivers will themselves brushing the ‘B’ pillar every time they get into the car. They’ll then finding, if they adopt a normal seating position, that the pillar is then lining up with their shoulders – which does make the cabin feel subjectively smaller than that of the three-door.

Still, there is an obvious plus side, with far easier access to the rear seats. The five-door looks good, too – and buyers will still be able to opt for the three-door A1’s trademark contrasting roof colour.

Mechanically the five-door is identical to the existing three-door, with the same choice of engines and transmissions. That means three petrols – an 85bhp 1.2-litre TFSI and a 1.4-litre TFSI in both 121bhp and 183bhp states of tune – and one diesel, a familiar 104bhp 1.6-litre TDI. A ‘cylinder on demand’ 138bhp TFSI engine and a 141bhp 2-litre TDI will follow later in 2012. As for 0-60 time, you're looking at 9 seconds.

As Audi claims, it’s very similar to the existing three-door A1, although the chance to try different versions back-to-back did give new clarity to some of the range’s strengths and weaknesses.

More reviews for A1 hatchback

We drove the less powerful 121bhp 1.4-litre TFSI (which Audi reckons will be the most popular engine in the range) in conjunction with the optional seven-speed 'S-Tronic' (read: DSG). It’s a got a proper zing to it, revving happily with an enthusiasm that belies it’s relative lack of urge. Even if you use a big stick, the performance numbers are warm rather than hot – but this is an engine that loves to be worked hard. The seven-speed DSG box delivers a decent impression of an automatic when left in ‘drive’, although it can feel a bit lurchey when manoeuvring at low speed. Our preference is still for the standard manual ‘box, despite its over-light shift action.

Our test car also came fitted with sport suspension, a zero cost option. Firmer dampers give the chassis a bit more purpose in corners, but the trade is a busy ride that never quite settles down, even on apparently smooth tarmac. The standard ‘dynamic’ suspension feels better sorted on British roads. There’s little steering feel, although the A1 responds accurately enough when asked to pick and follow a line.

That depends on what you’re comparing it to. Audi would like us to see the five-door A1 as being a rival to the Mini Clubman, but the oddball estate doesn’t really measure up as an alternative. It’s fairer to say that the A1 is a very classy, very expensive supermini that commands a sizeable premium over mainstream rivals and – to judge from its sales success – seems to have successfully found its niche.

Audi reckons that two thirds of A1s will be Sportbacks. We managed 38mpg in rapid real world driving with the 121bhp TFSI engine, slightly disappointing for a car this small and light. By contrast, we got 57mpg out of the (considerably more crude) 1.6-litre TDI diesel under similar use.