The 182bhp Audi A1 S line is the quickest and sportiest A1 - at least until the forthcoming S1 turns up. 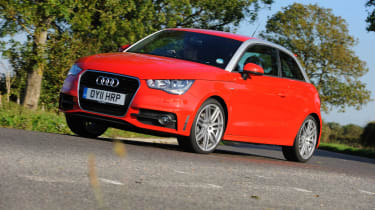 What is it? The fastest and sportiest Audi A1 you can buy. Until the S1 comes along, that is. In fact, this 1.4 TFSI 185 S Line was due to gain the far snappier S1 tag before bosses decided it wasn’t potent enough, and with front-wheel drive, lacking the Quattro drivetrain Audi’s S cars have always possessed. It costs £20,710. Technical highlights? It’s effectively Audi’s take on the Volkswagen Polo GTI, occuplying the top rung of a ladder that descends down to the Skoda Fabia vRS and SEAT Ibiza Cupra. As such, the A1 gets the same 1.4-litre twin-charged engine (a supercharger works at low revs, turbocharger higher to make it brisk at all engine speeds) and seven-speed twin-clutch ‘DSG’ transmission, only here the engine gets an extra 4bhp and the gearbox is called S tronic. What’s it like to drive? Pretty good, and without the pressure of an iconic performance badge on its rump, the driving experience doesn’t underwhelm a little like it does in the Polo GTI. The engine is a tremendous piece of kit, with a striking turn of pace in all gears on even part throttle. In the real world, it’s as a quick as a hatch really needs to be, with a shove of torque in all parts of the rev-range. Our test car didn’t have steering wheel-mounted paddles for the gearbox (they’re a £95 option) but with S tronic rarely slotting you into the wrong gear (and the economy benefits of using automatic mode), this isn’t the end of the world. It’s not a car you’ll ever drive just for the hell of it, with the steering light and precise but not satisfying to use, and the handling controlled and capable rather than captivating. It’s an easy car to drive very quickly, but not a rewarding one. Instead, you’ll revel in high levels of refinement and a truly quality interior. A circa-£2000 premium over the already-high-quality Polo genuinely feels fair. How does it compare? If you purely want the clever 1.4 TSI/seven-speed DSG combo, a Skoda Fabia vRS boasts five doors, a good kit list and a £16,415 price tag. But no one desiring an Audi would ever have the vRS on their radar, so more fitting rivals are the Citroen DS3 (150bhp, £17,895) and Mini Cooper S (181bhp, £18,015). The former looks funkier, the latter’s a better drive, but neither feels as well screwed together as the pricier Audi. Anything else I need to know? A four-wheel-drive S1 is on the cards, and will deliver north of 200bhp. A five-door A1 is also imminent, and a 1.4 TFSI 185 S Line version seems a dead cert.