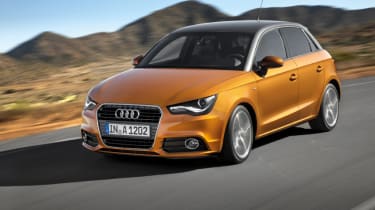 An Audi A1 with five doors. OK, it’s 6mm taller and 6mm wider than the three-door which frees up 11cm of headroom in the back. You can also order it in Samoa Orange, have the roof coloured in and there’s a couple of new engines play with. But really, it’s an A1 with five doors. It’ll cost you £560 more than the equivalent three-door, but Audi is confident that won’t put you off – it predicts two thirds of A1 sales will be Sportbacks once the first UK cars arrive in March.

Underneath the new suit it’s identical to the three-door. So that means front MacPherson strut and rear torsion beam suspension which get progressively more uncomfortable as you move through the three trim grades – SE, Sport and S line. An electronic differential, fitted to all models, does a rather good impression of a mechanical one and helps you go around corners rather than straight on.

The engine range is identical to the three-door from launch. Come the summer though and a 141bhp 2.0 TDI model and a 138bhp version of the 1.4 TFSI will join the fray – it’s the latter we’re interested in here. Not only does this enthusiastic little unit make the 182bhp 1.4 TFSI model seem rather overpriced and pointless, it also debuts Audi’s cylinder deactivation technology, already seen on the S8, in a four-cylinder configuration.

As long as you’re tickling the throttle, not on an upslope and between 1,400 and 4,000rpm it shuts down the middle two cylinders imperceptibly. As a result it’s a second faster from 0-62mph yet 6.8mpg cleaner than the 120bhp 1.4 TFSI model which doesn’t get the tech.

Precisely like a three-door A1 - accomplished without ever being particularly rewarding. The steering is precise enough for you to carve neat lines through the corners, while the electronic diff keeps you on that line when you feed the power back in. The ride on S line models is unnecessarily harsh, and the seven-speed S tronic gearbox, while undoubtedly accomplished, feels like overkill on a car this size. This 138bhp model, in Sport trim, with a manual ‘box is a sweet spot in the range, and is just as fast in the real world as the 182bhp model, on anything besides a drag strip.

The Mini Clubman Cooper S can be had for similar cash. Interior space is virtually identical to the Sportback, but its single rear door, placed on the wrong side of RHD cars, will rule it out for some. A five-door Polo GTI is yours for around £2,000 less than the mechanically similar 182bhp 1.4 TFSI, but if it’s interior quality and gadgets that flick your switch the A1’s cabin is still leagues ahead.

Tick the box marked ‘Online Services’ and Google Earth images are beamed to the sat-nav system, along with news, travel and weather info. Connect your phone via Bluetooth and the system uses your 3G connection to turn the entire car into a wifi hotspot, although quite why you’d want you mates sapping your data allowance from the back seat is beyond us.