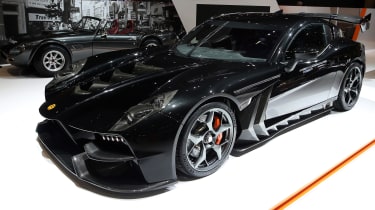 British racing car manufacturer Ginetta has revealed details of a new road-going supercar it will build next year. Shown for the first time at Geneva motor show, the car features a bespoke carbonfibre tub and a naturally aspirated V8 engine, and comes with plenty of racing pedigree to back up its ambitious claims.

The V8 is Ginetta’s own 90-degree 6-litre unit, which has a billet aluminium block and forged internals. The company claims the engine will produce over 600bhp, with peak torque rated at around 517lb ft, although the exact outputs and the points in the rev range where they are achieved is still under wraps. Ginetta says the engine is ‘mid-mid mounted’, which means it’s situated in front of the driver, but well behind the front axle. Connected to the engine via a carbonfibre torque tube is a six-speed sequential gearbox, operated via aluminium paddles behind the steering wheel.

> Click here for our review of the Ferrari 812 Superfast

Aggressive track-inspired aero and styling results in a downforce claim of 376kg at 100mph, which is only five per cent less than Ginetta’s LMP3 racing car achieves. The suspension is also suitably race-inspired, with pushrod-actuated springs and dampers connected to double-wishbone arms all round. Centre-lock wheels and carbon-ceramic brakes complete the package, and all help reduce unsprung weight. The car’s dry weight is estimated at just 1150kg. 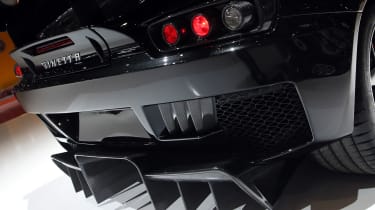 Ginetta has made some concessions to on-road comfort, including an interior loaded with Alcantara, carbonfibre and billet aluminium components. ABS, traction control, a reversing camera, auto headlights and even wireless phone charging are all fitted, too. However, we suspect the carbonfibre tub chassis and the engine’s placement inside the dashboard might stop this supercar from keeping Bentley up at night in terms of interior refinement.

But that’s not what this Ginetta is all about, rather it’s about offering a near racing-car driving experience in a fully homologated, road-legal car. Ginetta plans to build 20 units in total from 2020, with 60 per cent of those already sold prior to the model’s reveal. Prices start from £340,000, which places it between the limited-run seven-figure hypercars and the more traditional series-production supercars such as the Ferrari 812 Superfast and Lamborghini Aventador.