The German brand takes the xDrive M40d model to 380bhp, adding an array of carbonfibre components 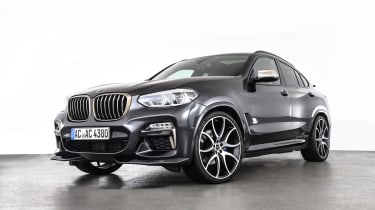 Following the reveal of the full-fat X3 and X4 M Competition models, German tuner AC Schnitzer has worked its magic on the non-M variants of the X4. Adding a whole host of carbonfibre components, new suspension, more power and interior tweaks, could this be a more affordable alternative to the near-£80,000 X4 M?

Alongside the xDrive 30d model, taking power from 265 to 315bhp, AC Schnitzer has taken the M40d from 326 to 380bhp with an ECU tune and a more free-flowing exhaust system. The tuner hasn’t quoted performance figures for the uprated models, however we’d expect a slight improvement on the 4.9sec quoted 0-62mph sprint for the M40d. It might not be quite as quick as the X4 M Competition, but with that diesel torque we’d imagine it’ll feel plenty quick enough. Although no tuning has been announced, AC Schnitzer will also fit a new exhaust system to the X4 M40i, removing that pesky sound-sapping particulate filter.

Extensive visual tweaks have been made to the X4s, ranging from (multiple) rear spoilers available in carbon, black and chrome finishes, a carbon front splitter, diffuser and AC Schnitzer badging. We can’t imagine these components will do an awful lot when it comes to adding downforce, but they certainly set the fettled X4 apart from standard cars. An addition that will alter performance, though, is the brand’s suspension kit, adding aggression and stability with a 20 to 25mm reduction in ride height. New lightweight 19-inch to 22-inch wheels of various design and colours can be optioned, too, with up to 245/45 R 20 front and 275/40 R20 rear tyres. 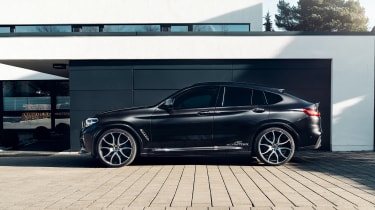 Modifications don’t stop at the outside, with the aluminium pedals, an aluminium footrest, new keyholder and various other tweaks featuring inside.

Pricing for the kit is yet to be announced.