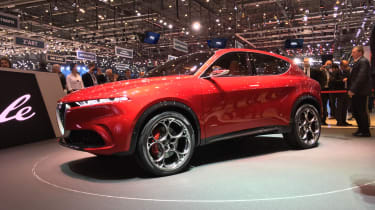 A surprise debut at Geneva from Alfa Romeo was the arrival of a compact SUV to rival models such as the Audi Q3 and the BMW X2. While we would have preferred to have seen the arrival of one of its new sports cars there’s no doubt the success of Alfa’s new SUV will have a direct correlation to the viability of its new performance models.

The new compact SUV, dubbed the Tonale, is named after a pass in the Italian Alps, just one that’s less well known than the Stelvio that gives its name to Alfa’s larger SUV. The Tonale, while currently a concept, appears to be nigh-on production ready and like several current compact SUVs its styling prioritises style over ultimate practicality.

Slim triple headlights sit on either side of the classic Alfa grille while the coupe-style profile with tapered rear windows and slim LED rear lights complete the look. Alfa talks about referencing classic Alfa designs from the past such as the Duetto and the Disco Volante, but we think that’s stretching things a little, although the classic Alfa teledial wheels do make an appearance in chunky 21-inch form. 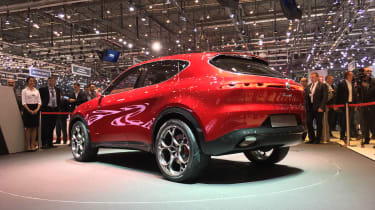 What the Tonale will offer will be Alfa Romeo’s first plug-in hybrid powertrain, vital in today’s increasingly electrified marketplace. The electric motor will be rear mounted and we expect both rear- and all-wheel drive versions to be offered with the expected multi driving modes – all-electric, hybrid and what Alfa is dubbing a ‘Dynamic’ mode which will offer maximum output from both motors. No word yet on specific outputs but you can more or less guarantee that engines will be shared with the next generation Giulietta.

Alfa Romeo is predicting the compact SUV segment will grow by an astonishing 40 per cent in the coming years and the Tonale should go some way to ensuring the brand can hit its target of 400,000 annual sales by 2022.

Let’s hope the success of the Tonale will spawn the oft-promised sports car revival, too.