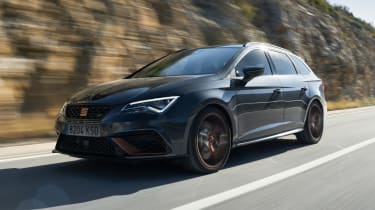 Only days ago, SEAT announced a Leon Cupra R ST model, which ostensibly is little more than a series-production version of the Cupra Carbon Edition estate we drove last year. Now though, SEAT UK has revealed further information on the model, including that it will be available with an optional power pack that will give it an impressive 365bhp.

This greater figure – up from the standard R ST’s 296bhp – is courtesy of an Abt-sourced tuning pack, which reprograms the ECU to produce the extra 69bhp. Crucially, this package is insurance rated, has no effect on the homologation status of the car, and does not affect the manufacturer's warranty. The package is priced at just £500 too, although the car itself is a fairly hefty £37,975 in standard specification, making the Abt-upgraded model £38,475 in total.

For the record, this power upgrade means this estate has the highest-output version of the EA888 turbocharged four-cylinder engine ever sold by the VW Group in the UK. It will shoot the Cupra R ST to 62mph in just 4.5sec – 0.4sec quicker than the standard car, and 1.3sec faster than the standard front-wheel-drive Leon Cupra hatchback. As with the engine’s hardware, the rest of the drivetrain is also unchanged, with power delivered via the standard Haldex-style all-wheel-drive system and a seven-speed dual-clutch transmission. 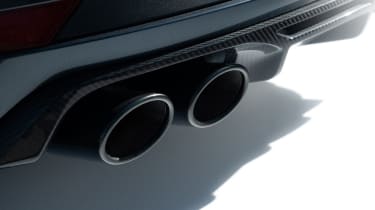 Keeping all this power in check are standard adaptive dampers, Brembo brakes, and a revised chassis set-up over the standard Cupra 4 Estate, with new uprights for the front suspension that increase negative camber by two degrees. Rear negative camber is also increased, although the hardware remains unchanged.

Adding to the fruity R package are a set of quad exhausts within a carbonfibre rear diffuser. The rear wing, wing mirror caps and side skirts are also feature carbonfibre, and all debuted on the Carbon Edition car launched last year. 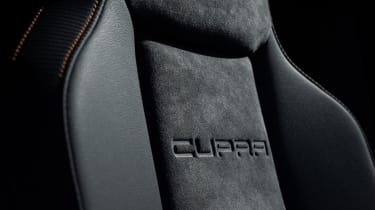 Like the limited-edition Leon Cupra R hatchback that also appeared last year, there are bronze accents in the form of the front air intakes, 19-inch wheels and badging. The main badges, incidentally, and perhaps a little confusingly, are still SEAT’s, and not those of the standalone Cupra brand. The model is available in four shades: Magnetic Tech, Midnight Black, Nevada White or Blackness Grey.

Revealing more of the EA888’s full potential than ever before, the power pack equipped Cupra R ST might just be the most exciting MQB-based model we’ve experienced.