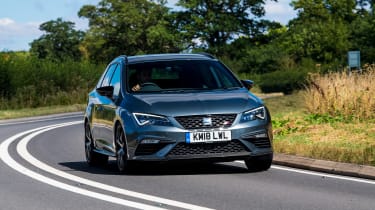 As a last hurrah before the current Leon Cupra loses its SEAT badge and goes full Cupra for its next generation, the Spanish marque has decided to give the Cupra 300 ST estate a few choice upgrades with inspiration taken from the limited-edition Cupra R hatch. But where the Cupra R had a selection of mechanical upgrades to partner its wider arches and copper-effect elements, the Carbon Edition estate is more of an aesthetic exercise, sharing its internals with the standard ST Estate.

What the Carbon Edition does get is lots of, well, carbonfibre. Plenty of the Leon’s exterior components feature the stuff, including inserts in the side skirts, a (vulnerable looking) front splitter and ornate rear diffuser. Inside the new diffuser is a fresh set of quad exhaust outlets, a first for SEAT. The wheels have also been pinched from the Cupra R, sharing the spindly ‘y-spoke’ design, with a diamond-cut black and silver finish. Inside is much as before aside from picking up a sportier seat design, also borrowed from the Cupra R.

> Click here for our review of the Golf R Estate

Of course, these changes don’t come cheap, and at £35,575 it’s a lot of money to drop on a SEAT, especially one approaching its ‘best before’ date. But there is more to the Cupra story than meets the eye, as the sporting sub-brand will soon defect from the main SEAT branding and set up as a separate entity. This, combined with the incoming WLTP regs and an all-new Leon model, means that this is also to be the last SEAT Leon Cupra estate before a new one is launched under the specific Cupra brand at the tail end of 2019. 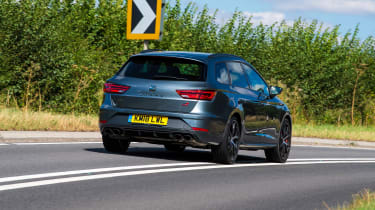 The powertrain has not picked up any discernible changes over the standard Cupra ST, so you get the tried and tested combination of the ‘EA888’ turbocharged, 2.0-litre four-cylinder engine producing 296bhp, with a plateau of 280lb ft of torque available between 1500 and 5000rpm. This power unit is combined with a six-speed dual-clutch gearbox and Haldex all-wheel-drive system, but there is no manual option as in the standard Leon Cupra ST. The 0-62mph sprint is dealt with in a brisk 4.9sec, while the top speed is limited to 155mph.

Performance is impressive, but it doesn’t feel quite as rapid as it might on account of its lardy 1446kg kerb weight. Despite the new exhausts, the noise levels have only been subtly increased, but the standard Leon Cupra’s internal sound generator is still made very obvious when the powertrain is in dynamic mode, which is fun for about 20 minutes and then quickly becomes drony and a little annoying at speed. Still, the engine is its usual wonderful self, surfing the impressively flat torque curve whilst maintaining its appetite for revs. It doesn’t quite have the top end its more potent Cupra R sibling shares with the Golf GTI Clubsport S, but against so many of its rivals, the EA888 remains an adept and exciting motor.

If you’ve driven a Golf R or Audi S3 recently, you’ll be instantly familiar with the Cupra ST Carbon Edition’s drivetrain. Despite using the older six-speed dual-clutch gearbox, it's a slick and well calibrated unit, and nothing like as dim-witted as the VW-group’s earlier efforts. Put your foot down and the clutch will engage the gear quickly and cleanly, with shifts firing through the relatively short ratios quickly and cleanly no matter the driving mode.

Changes in manual mode are crisp, with heavy throttle shifts usually delivered with a subtle parrp in Cupra mode, although it still trails the best in class for response and drama. The Carbon Edition makes do with Continental Conti Sport 6s rather than stickier Michelin Pilot Super Sports available in other markets. Like other all-wheel drive VW models, the SEAT doesn’t have any form of mechanical limited-slip differential, instead making do with a ‘virtual’ XDS diff on the front axle. 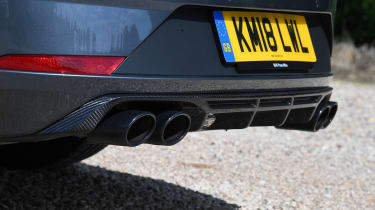 On the face of it then, the SEAT Leon Cupra ST 300 Carbon Edition is little more than a Golf R Estate in carnival drag, but if you were hoping for a Golf R with a frisky Spanish overtone you might be disappointed. The Cupra ST lacks a Golf R’s ability to dig into the road surface and work the chassis, feeling slightly more removed from the action. This is likley explained by the less focussed rubber, but also has something to do with the suspension tune that is a little firm for UK roads.

Pitch the car into a corner on the nose and despite its 26cm of extra length over the hatch, the Cupra remains completely straight-laced. Power down early and the Haldex system will funnel some of the power to the rear, but only enough to inhibit wheelspin, not encourage the rear axle to get into the action. Hold the throttle and the front end will run out of grip much sooner than the rear owing to the Haldex system’s inherent front bias, with nothing like the adjustability that has been engineered into the standard Golf R hatch.

> Click here for our review of the SEAT Leon Cupra R

Keep pushing and the body control also starts to unravel, the Leon running out of composure where the best hot hatches like the new Mégane RS and Civic Type R really come alive. Unfortunately, the SEAT doesn’t cosset like a Golf R to compensate, as road noise and general refinement is average by modern standards, meanwhile fuel consumption, although not usually a massive consideration in these pages, struggles to top 30mpg.

If it sounds like we’re down on this car, it all must be taken in context, as it is still an entertaining performance family car, but compared to the Golf R estate lacks a layer of polish that instead of intensifying the experience, just reveals its raw edges. 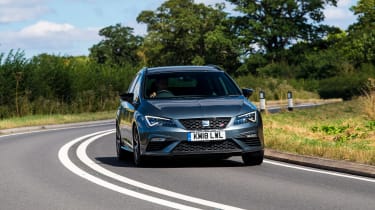 With only 50 units reaching the UK, it will likely lean on its rarity rather than capability, but at over £35,575, it’ll probably need to. The Golf R is more expensive on the road (just under £36,125), but its value equation is easier to swallow thanks to its better resale values, and the higher levels refinement and performance capability.

As it stands, there are few other compact performance estates on the market, but the next-generation Focus ST estate should be arriving in the next year or so. The Skoda Octavia vRS Estate is larger and cheaper, but less powerful and focussed, if not capable.

It’s not too far a stretch to consider larger performance estates, either, as the Skoda Superb Sportcombi is pretty much the same price, is only slightly slower, but lacks the sporting edge of the Cupra. Either way, if you’re a fan of the current Cupra, this might be a great way of nabbing a rare and family friendly version, but if you’re after the latest and greatest sporting drive with room for the family, please apply elsewhere.