An impressive spread of abilities was always on the call sheet, but the balanced chassis and impressive calibration take the package further 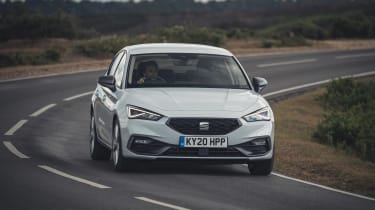 The SEAT Leon has been a success story for the Catalonian VW Group outpost, selling in consistently high numbers over the entirety of its lifespan in its hatchback and estate forms. It’s no surprise to see little risk was taken when coming up with this latest version, but while the ingredients might look the same, the result is actually quite different.

As before, its key differentiators from the closely related Golf are its spritely Spanish image, a more dynamic handling balance and a few thousand pounds off an equivalent Golf’s asking price.

But there’s more going on here than the new Leon just being a Golf on a discounted Magaluf holiday, because as the perennial VW corners itself into a quasi-premium realm within the family hatchback market, so too has SEAT been able to expand its remit to be a more rounded and complete offering.

Highlighted by a slick and fuss-free interior, the new Leon may not just make for an impressive family hatchback in a crowded market place, but also an exciting baseline for the next Cupra models to build on. 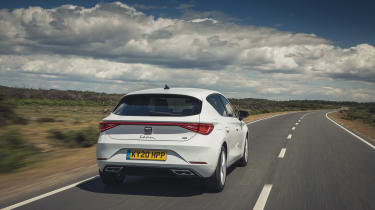 All Leons share a set of three- and four-cylinder engines with the Golf and Octavia. We’re driving the most potent standard Leon so far available, fitted with Volkswagen’s 1.5-litre turbocharged four-cylinder petrol engine, matched to a six-speed manual transmission. Peak power is rated at a class-average 148bhp, with 184lb ft of torque available down at 1500rpm.

On paper, this powertrain is relatively unremarkable, lacking any mild-hybrid assistance, cylinder deactivation or clever variable ignition systems, but what it lacks in complexity it makes up for in sheer competence. The engine is responsive, torquey and incredibly refined, and while the transmission is typically VW Group light, its accurate, effortless shift is a good ally to the engine.

Performance is equally middle-ground, with 62mph arriving in 8.4sec. This is identical to other VW Group hatchbacks of the same technical make-up, and only just behind the more powerful Mazda 3 Skyactiv-X and Ford Focus 1.5-litre EcoBoost. What the numbers don’t tell you is the amount of urge this powertrain produces from what feels like zero rpm, especially compared to the gutless Mazda and laggy Ford. While it hardly sings at the upper echelons of the rev band, the Leon’s 1.5 turbo petrol certainly feels more powerful than its figures suggest, something no doubt helped by the clean linearity of the torque delivery and impressively sharp throttle response. 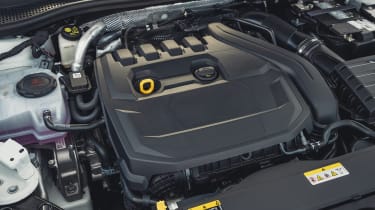 The new Leon sits on the same underlying chassis as the previous model, but like the Golf and Octavia has been thoroughly updated. Structural changes on the Leon specifically include a more upright windscreen that sits further back than before. This lengthens the bonnet and gives the new Leon a more defined two-box shape, in a similar fashion to that achieved by Ford with the current Focus.

Alongside the new silhouette is a refined design language that’s less angular and aggressive than before. What takes its place is an arguably more resolved design that’s defined by a single bodyline across the side that wraps around the tailgate. Lighting is a focal point of the new Leon, with a fresh LED light bar at the rear that is dramatic and well executed, although the repeated use of headlight units also found on the Tarraco and Formentor SUVs is a let-down, as each perhaps resembles one another a tad too much. 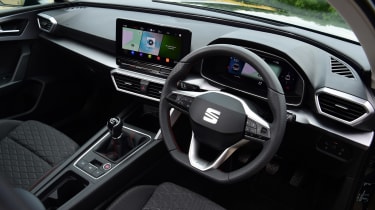 All SEAT Leons are fitted with a rudimentary and cost-reducing torsion-bar rear suspension. While this is an inherently crude method of connecting the rear wheels, on the road the Leon actually drives impressively well, feeling perfectly settled over uneven bumps and road intrusions. The generous tyre sidewalls on the rental car-spec 17-inch alloy wheels of our test car certainly help, mind.

While the chassis and powertrains at this stage closely resemble those of the previous generation Leon, bigger steps forward have been made in interior technology and digital integration. The FR model tested here comes as standard with a digital driver’s display and fresh 10.2-inch touchscreen infotainment interface. All screen graphics are slick, high resolution and perfectly congruous, and while many will lament the replacing of a volume knob with the touch-sensitive slider at the base of the screen, it actually works fairly well.

The rest of the experience is less intuitive. Like many an increasingly complex digital interface, while easy to use when stationary, the constant glancing at the screen that’s required on the move to do simple tasks such as reduce the fan speed makes it feel more hazardous than it needs to be. 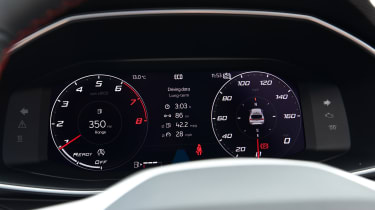 If you’re at all familiar with the previous Leon, or indeed any of its related brethren, you won't find the new one at all challenging to just get into and drive. All of the control weights are deftly aligned, with no one element shouting louder than the other; each has a slickness that’s become a trademark of modern VW Group models.

Concentrate a little harder, though, and there is a nuanced difference between the Leon and its rivals. The steering, for instance, has a surprisingly fast ratio to it, weighting up progressively and consistently at speed. It’s an accurate rack, and while feedback is at a premium it does highlight the crisp response from its front axle. 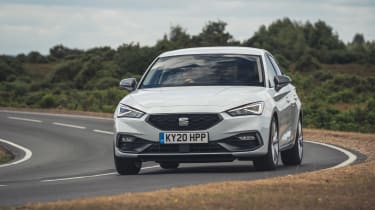 The four-cylinder engine feels more responsive and enthusiastic in this application than in other VW Group models we’ve tried, with little to no turbo lag when in appropriate gears. Throttle response is also excellent, and while the gearing is typically long (blame emissions regs for that) there is substance to the spritely feel that the Leon’s marketed on.

It’s agile too, and despite the torsion beam rear suspension flows with the road with a surprising amount of sophistication. There’s a firm edge to the ride over rough surfaces, but the trade-off is an impressive level of composure when you begin to lean on the chassis. The overall balance is largely benign, but then the Leon hasn’t really been designed for lift-off-oversteer antics, so it’s a compromise that feels well judged and considered.

What the chassis does tell us is that incoming high-performance Cupra models have an impressive base to start from when the performance numbers start to grow. The previous-generation Leon Cupra only got better with age, and with a like-for-like return of particular favourites such as the Abt-fettled Cupra ST estate due to return, things are looking up for when Cupra finally gets its hands on this impressive new Leon. 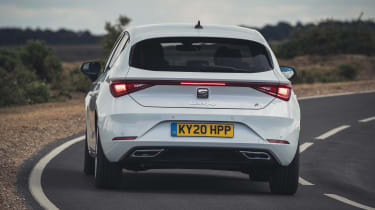 The new Leon will set you back from £20,995 for a basic non-FR three-cylinder model, but the FR we’re driving here with the more potent 148bhp 1.5-litre petrol engine paired to a manual transmission is £24,805. FR models are also well equipped, with standard LED lighting front and rear, premium interior trim, 17-inch alloys, a wide variety of active safety tech with varying degrees of usefulness (and irritation), and the full-spec infotainment and digital dial pack displays.

This compares favourably to the Golf 8, which kicks off at closer to £24,000. Specify an equivalent R-line model with the same 148bhp engine and a six speed manual transmission and the price will jump to closer to £27,000 and you’ll still need to shell out extra for the upgraded LED headlights and Discover Pro navigation and infotainment system. A Skoda Octavia of equivalent specification is priced more in line with the SEAT, but is a bigger car overall.

Looking outside of the VW Group, a Mazda 3 Skyactiv-X in equivalent Sport Lux trim costs from £25,640, and while the new engine is clever in theory, we’re still struggling to mesh with the powertrain in our long-term GT model, due to its torque-light delivery and the car’s sodden dynamics. The Focus remains one of the more agile and entertaining options in the class, but a back-to-back comparison with the Leon might see it relegated to second spot on the handling ladder. The Ford’s engine range has also been overhauled, with an ST-Line hatchback with a manual transmission and 149bhp now featuring a fresh 1-litre three-cylinder EcoBoost unit paired with a mild-hybrid system. We’ve yet to drive this new generation of hybrid Focus, but at £24,890 it’s no longer the value offering in this equation.