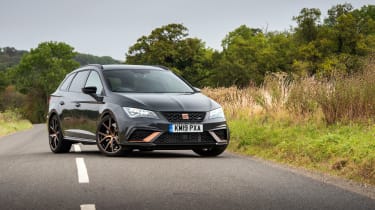 The SEAT Leon Cupra has never been a car lacking in performance, but German tuning specialists will, if you desire, put a little more sizzle in your salsa.

For a fairly modest £500, your SEAT dealer can plug in an additional ECU to take power from the standard 296bhp (petrol particulate filters and all) to a thumping 345bhp, with corresponding increases in torque. As a manufacturer-approved upgrade, it also avoids any nasty warranty surprises.

The Leon’s getting on a bit now though, so does a power boost from Abt elevate the Leon back to its position near the top of the class, or would your money be better spent elsewhere? 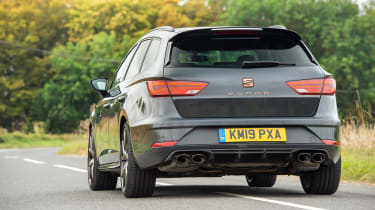 We’ve written so many paragraphs on the Volkswagen Group’s EA888 engine, it’s almost possible to reel off the basic stats from memory: four cylinders, two litres, a single turbocharger, 296bhp at 5300rpm, and 295lb ft of torque produced from as low as 2000rpm.

The rest of the mechanical make-up is the same too, from the seven-speed dual-clutch transmission to the Haldex-based all-wheel-drive system (called 4Drive in SEAT-speak). Mix everything together and you’ve got a car that in standard form can whittle off 0-62mph in 4.9sec and hit 155mph.

With Abt’s ECU upgrade, the power, torque and top speed figures grow, and the acceleration number shrinks. Peak power is now 345bhp, peak torque 324lb ft, top speed 163mph, and the 0-62 falls two tenths to 4.7sec. For comparison, the last is identical to the recently departed Ford Focus RS, which also made 345bhp.

Like the Leon’s performance stats, there’s little here we’ve not seen a dozen times before. MacPherson struts up front, a multi-link behind, and with the model tested here, a handsome five-door estate bodyshell that remains perhaps one of the more attractive cars in this class. A practical one too, with 587 litres of space behind the rear seats.

At 1431kg it’s also far from hefty given its size, though with some rivals in the 1300-kilo range it’s also no flyweight. Wheels are 19-inch items wrapped in broad 235/35 rubber. 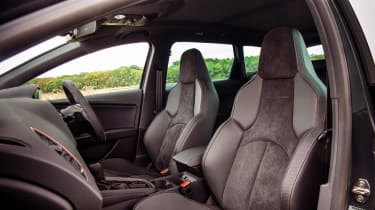 With almost every modern hot hatchback this size producing roughly 300 horsepower these days, performance that once seemed remarkable has now almost become routine.

Apart from, that is, in the Abt-tweaked Leon Cupra. Keep the revs high enough to avoid the slightly slack low-end response from the 2-litre unit and the Leon absolutely flies, with a crescendo to the power delivery that makes it well worth hanging on right until the limiter. In terms of seat-of-the-pants feel it has the measure of anything in this class for outright speed.

With all-wheel drive and a DSG ’box it’s also hilariously easy to deploy this performance, and the resulting acceleration feels pretty much relentless for as long as you dare hold the pedal to the carpet. The sound piped into the cabin still feels slightly synthetic, and VW’s popular 2-litre EA888 is no longer a class-leader in terms of refinement or crisp response, but there’s enough volume and raucous character to accompany each lunge for the horizon that there’s no questioning the entertainment value.

Thankfully, the Cupra still copes with the bits between each straight too. Like the engine, it’s no longer a class-leader in this area, with steering that feels a little light and lacks immediate response off-centre, and front tyres that don’t bite as hard as some rivals. 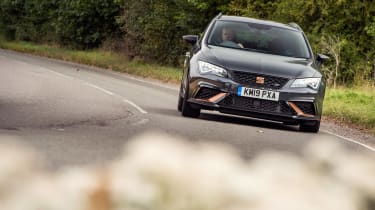 It’s an expressive chassis though, moving around more than some tied-down equivalents, and feeling almost rear-driven when powering out of tighter corners. The light steering starts to simmer with feedback and precision with a little more lock, it feels more agile and fleet-footed than the estate length might suggest, mid-corner balance is good, and with so much force under your right foot, the drive out of each corner is remarkably strong.

The Leon is, admittedly, starting to feel its age. While the brakes are strong and the ride quality perfectly acceptable for a car of this type, refinement lags the class best, the structure feels a little less resolute than alternatives, such as the ultra-stiff Civic Type R’s, and the cabin, while logically arranged, doesn’t quite feel appropriate for the near-£35k price tag. For pure fun though, it’s well worth a look.

The Leon Cupra R ST tested here begins at £34,760, with prices for the Leon hatch (making ten horsepower less and driving the front wheels alone) currently starting at £31,360. To that you can add £500 for the Abt upgrade, which as mentioned earlier, isn’t such a bad deal for nearly 50bhp extra.

Abt’s tweaks put the Leon’s output well beyond that of most other hot hatchbacks (and similarly sized estates) on sale whether front- or all-wheel driven. Only models such as the Mercedes-AMG A45 and Audi RS3 develop more in this class, and those are priced rather higher than the SEAT. 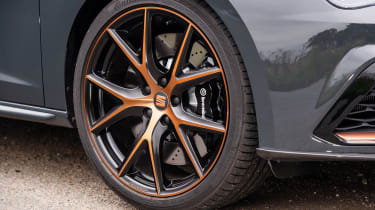 In terms of ability, the Leon still lags many of its rivals – the front-drive hatch placed 11th in our recent hot hatch megatest, which was topped by the Honda Civic Type R, Hyundai i30 N Performance and Renault Sport Mégane 280. Had the hatch been offered in all-wheel drive, it might have done better – the similar Golf R managed 8th – while the value and sheer straight-line joy of the Abt upgrade makes it even more tempting.